We have previously featured large airliners, but few (if any) of them built to minifig scale (Ryan McNaught’s A-380 is technically only half an airliner). Calum Tsang started designing his minifig scale Boeing 777 back in 2006, shortly after one of the real aircraft set a new long-distance record for commercial airliners. He started building in 2011 and has recently fitted new wings and engines. This dedication has paid of, because it is big and it is beautiful. 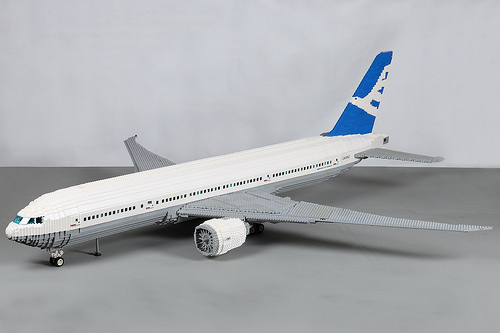 The model is a whopping 200 studs long and has a similar wing span. With that size, Calum has had to use wood to strengthen the fuselage spine, as well as a few metal struts to support it, but it’s a very nicely sculpted model. One of my favourite bits is the tail fin, with a brick-built version of the logo that LEGO use for the aircraft in recent City sets.

2 comments on “The Boeing Triple Seven is ready for take-off.”