Most of the older models by Everblack are essentially his own refined versions of models that were already out there. They are very nice and I’ve blogged a few, but with his new F-16 he has moved into completely new territory. 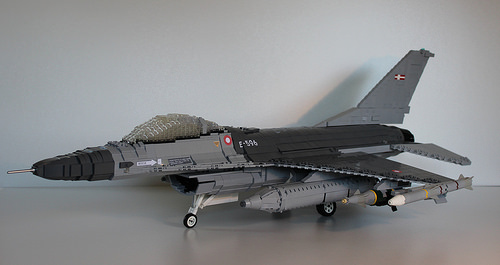 The F-16 was developed in the seventies as a lighter and cheaper alternative to the F-15 Eagle. As such, it’s relatively small for a modern jet. Everblack’s model isn’t small, however. Its scale is a whopping 1/18, which is about twice as large as his previous models. This large scale has allowed him to do some beautiful sculpting on the jet, skillfully using curved slopes. Judging from the way the undercarriage and the wings bend, the large size does come with a few penalties, but my word, it looks stunning.