Before 1974, LEGO sets were a fairly unpopulated landscape of vacant houses and empty cars. Preceding the iconic minifigure by several years, LEGO released a new kind of figure the year I was born, and some of my first LEGO sets included these figures. Paul Hetherington (Brickbaron) celebrates the 40th birthday of this lesser-known LEGO fig with a lovely double-decker bus. 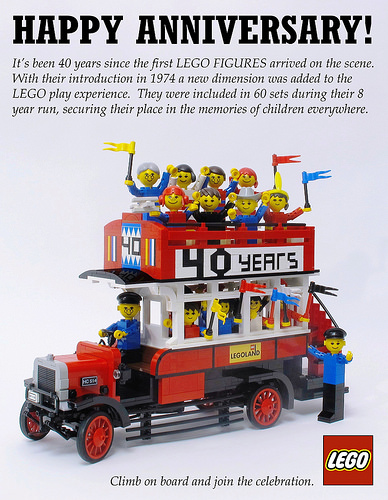 I wanted to create a new model that had a distinctly vintage look. My design cues came from some 1970’s Lego trade adverts. I purposely chose a model that used the colors that are incorporated in the Lego logo. In the 1970’s the Lego color palate was limited to yellow, red, blue, white, black, with small amounts of gray and green. On a personal note, I chose the British 1910 B-Type double decker bus because I was born in England and that was were I first came across these figures as a child. As well, if you look at the poster from a distance, red and white are the predominant colors which represents my Canadian upbringing.

1 comment on “Happy 40th birthday to the first LEGO figures!”