During World War II, the Allies fielded approximately 50,000 M4 Sherman medium tanks. But ignoring the hard lessons that the Soviet Red Army learned about German armor on the Eastern Front, the United States and its Western allies delayed production of better-armored tanks with bigger guns until very late in the war. That bigger, better tank — one that could go head to head against German tanks — was the M26 Pershing. However, only 20 Pershings saw combat, between February and May 1945. 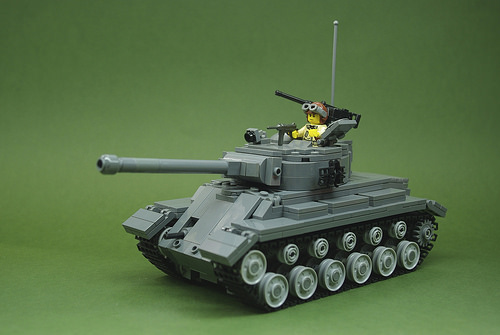 that this delay in fielding the M26 Pershing in favor of the existing M4 Sherman cost thousands of lives on both sides by delaying the end of the war in Europe for six months. As much as I love the Sherman for its iconic “tankiness,” I was inspired while reading Death Traps to try my hand at a Pershing as well. (I was also running out of Technic chain link for narrower tank treads until my first batch of Brickmania Track Links arrived, so I was forced to use the wide LEGO tread pieces if I wanted to build anything.)

After more than a decade on the web and a dozen LEGO events, one of my failures as a builder is that I tend to build first for static display and photography rather than functionality, and it takes a couple of iterations before I go back and give my models a bit more of an interior life. I’ve tried to improve this over the last year by adding internal details to my vehicles like a removable engine in my Shermans. But I still struggle with tank guns that elevate and depress properly. I’ve now addressed this shortcoming with my latest tanks, including this Pershing, my Soviet KV-1, and a couple of my newer Stuarts. Given differences in turret design, the challenge has been that each tank has required a different solution to achieve an elevating gun, ranging from guns that pivot on Technic pins to ones that go up and down on simple hinge bricks. It probably shouldn’t be this hard…

Strangely perhaps, my favorite detail on my Pershing is the set of stowage boxes on the sides, which are half-stud-offset in two directions to leave half-stud gaps between the boxes and a half-stud lip at the edge of the tank. You can see this best in this comparison shot, which shows just how much lower and wider the Pershing is compared to the older Sherman — a difference that made the Pershing simultaneously harder to hit and more agile on rough terrain. 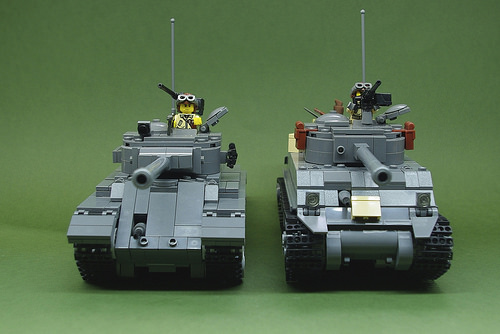 Finally, here’s a quick little build I tossed together to showcase some of the rarer BrickArms elements that I’d picked up around BrickCon last year — an original American version of the M3A1 Scout Car that I posted last summer in Lend Lease program Soviet livery. 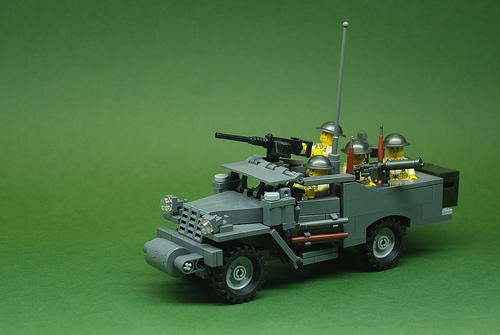 I managed to pack all of the following custom elements into this tiny little armored car:

For those of you curious what “overmolded” means, it’s an injection molding process in which a second color of plastic gets injected on top of another, bonding the two together. Will Chapman of BrickArms has been experimenting with the technique for a year or two, with absolutely beautiful results. But don’t expect to see this in large quantities anytime soon — Will hand-injects each batch in his secret laboratory. Josh and I had the privilege of visiting the BrickArms workshop last year, and learned first-hand just how labor-intensive the overmolding process is. Nevertheless, some of the overmolded items are available for sale from BrickArms resellers.