In little more than a week, I’ll be joining more than a dozen other members of the Brickish Association at Brighton Modelworld in the UK. This is a show for scale models of just about any kind imaginable. In the last years it has seen an ever-growing contingent of LEGO builders displaying their models to a discerning audience. Brighton is a wonderful town and the show is always huge fun. Expect a report in due time. At Brighton, among other things, we’ll be displaying a collection of rockets and missiles, including the whopping minifig scale rocket from Tintin built by Ian Greig (bluemoose). This idea prompted me to have a go at a few of the military models that have been on my to-do-list for months. 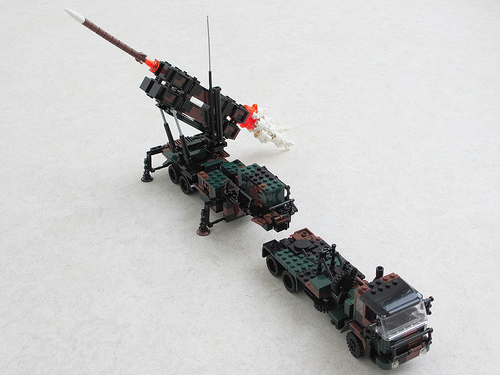 The first is a Patriot missile Transporter-Erector-Launcher (TEL), as used by the Dutch military. Patriot is an American surface-to-air missile system intended against aircraft and ballistic missiles. A single system consists of a number of trucks with a radar, command post, generator and communications equipment, coupled to a number of launchers. In the Dutch military, these launchers are mounted on trailers pulled by DAF YAZ-2300 tractor units. Dutch, American and German Patriot units are currently deployed to Southern Turkey, to defend against Syrian ballistic missiles. 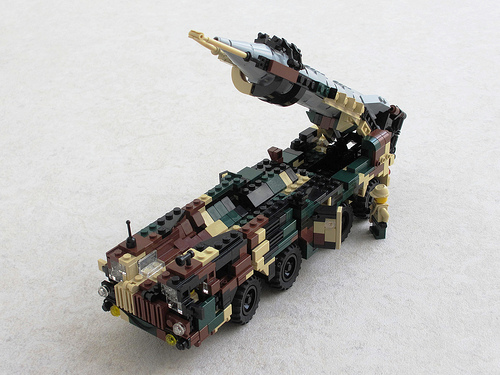 My second model is a ballistic missile on its TEL. The (in)famous R-17 Elbrus, better known as the Scud, was developed by the Soviet Union during the Cold War. It was widely exported to Soviet allies, including several Warsaw-pact countries as well as various counties in the Middle East, such as Syria, Libya and Iraq. Scud missiles also found their way to North Korea, which developed its own versions and in turn exported those to Iran. My model represents an Iranian missile, known locally as the Shahab-2, on its Russian-built MAZ-543 TEL.

Ballistic missile defense is a fascinating high-tech and high-stakes business. A typical short-range ballistic missile, such as the Scud, travels through the upper reaches of the atmosphere and plummets down towards its target at about five times the speed of sound. To intercept it far enough from its target, the interceptor missile travels at a similar speed. The intercept has also been described as hitting a bullet with a bullet.

The models were interesting to build, because they have lots of details and things that hinge, but also because of their camouflage. Camouflage is designed to break up the contours of an object and to allow it to blend into the background. The colours tend to be arranged in patches. Randomly throwing bits with different colours together doesn’t give you the right look. I tend to use the following guidelines:
1) the border between colours should ideally never be a straight line of more than 3 or 4 studs long before it changes direction.
2) once a border has changed direction once, it should change direction again quickly
Of course, this gets progressively more difficult as the number of colours in the scheme increases and as you move to smaller scales. I wouldn’t have been able to do it if I hadn’t finally gotten my hands on decent numbers of small dark green plates.