71 years ago today — on February 2nd, 1943 — the Red Army defeated German forces who had occupied Stalingrad more than 5 months earlier. Nearly half a million Soviet men and women were killed defending their city from Nazi aggression. The Battle of Stalingrad is arguably the turning point of World War II — a horrendous loss for Hitler and the Third Reich that weakened German forces and led ultimately to Allied victory 2 years later.

Although I haven’t had as much LEGO time over the last six months or so, I’ve managed to keep building. Spurred on by the new Brickmania Track Links, I finally got around to photographing the dozen or so models I’ve pumped out since BrickCon in October. The buildings and minifigs in my diorama of Stalingrad were part of the “Operation Brickarossa” collaboration last year, but my KV-1s tank is new. 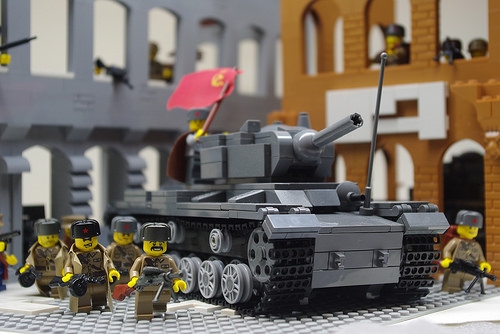 Compared to smaller and stranger tanks I’ve built, the KV-1 was relatively “easy” and I don’t have a whole lot in the way of build notes. One recent change to my building methods is to try to include more functionality from the start. Admittedly, I failed to do so on the turret hatches, but this is one of my first tanks to include a gun that elevates and depresses properly.

With several hours of photography and editing out of the way, I’ll be posting the rest of my models on Flickr, along with write-ups here. In particular, check back for full reviews of the new Track Links, BrickMania kits, BrickArms items, and more.