More than six years ago, Lino Martins (Lino M) and Nathan Proudlove (Proudlove) started a flickr group for LEGO car lovers called LUGNuts. Over the years they’ve managed to draw in many of the best-known car builders in the online LEGO community. They’ve also enlisted the help of Tim Inman (Rabidnovaracer), Peter Blackert (Lego911) and myself as moderators. I’m pretty sure that many LEGO-related flickr groups fizzle in far less than six years, but LUGNuts is still going strong. The vast majority of cars blogged here are built by LUGNuts members (and not just because I look at the group’s photo pool for things to blog). The group is kept interesting by the monthly LUGNuts challenges. For these, members build something according to a particular theme, which is usually thought out by Lino. He also gives the challenges a snazzy name. We usually don’t pick winners and there are no prizes; the fun is all about participating, being creative and building a vehicle that you perhaps wouldn’t ordinarily build. Here are the challenges and some of the vehicles built for them last year. 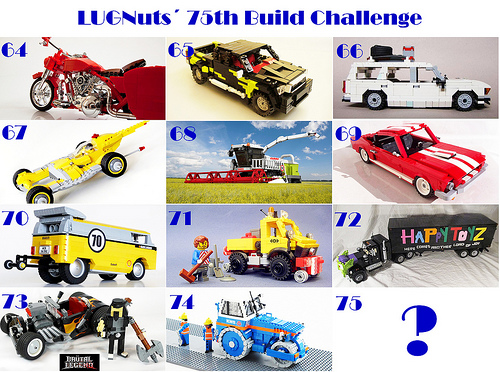 We’re now running the 75th challenge, can you believe it? Lino has imaginatively called it the Freakin’ Balls-Out Sweet LUGNuts 75th Challenge Extravaganza!. This one is special. Every participant builds a car assigned to them by one of the other members and there are prizes for the best three builds (judged by the admins/ moderators). To add some extra fun, there are also prizes for the best three suggestions. If you’re into LEGO cars and ever wanted to build for a LUGNuts challenge, now would be the time to do it! The challenge runs until the end of the month.