For some reason, a lot of military builders choose to build their military vehicles in dark grey. I suspect that it is because more suitable colors, such as tan, dark green or olive green, are expensive and because relatively few parts are made in them. Of course, if you do want a color that is available in vast quantities, you could always opt for a United Nations color scheme. This is exactly what Project Azazel has done for two of his new vehicles: an M113 Armored Personnel Carrier and a Armored Infantry Fighting Vehicle (AIFV). 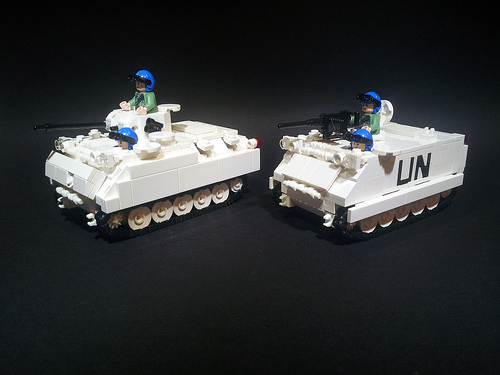 The M113 was developed in the mid-fifties, when the US Army needed a new Armored Personnel Carrier. It had to be smaller and lighter than existing vehicles, so that it could be transported aboard the then-new C-130 Hercules airlifter. The key to keeping the weight of the M113 down was a new welding technique that allowed using aluminum for the armor instead of steel. It first entered production in the 60s and is still in use with the US Army and many export customers all over the world. It also spawned many different versions, including the AIFV. This was a more modern and more heavily armed version. It wasn’t adopted by the US Army, but was further developed for export customers, including the Netherlands, Belgium, Turkey and South Korea.

One thing I like about the model vehicles, besides their refreshing white paint scheme, is that they don’t appear to be ridiculously large.