I am currently enjoying reruns of Star Trek The Next Generation on Belgian TV. When I saw the first episode a few weeks ago, many years after I first saw it, I was a bit surprised at how dated the series looks nowadays and how young most of the actors were. Of course, many Trekkies consider Captain Picard, Cdr. Riker and their crew to be young upstarts. The real Starship Enterprise is captained by Kirk, with Spock serving as his first officer and Uhura, ‘Bones’ McCoy, Chechov, ‘Scotty’ and Sulu making up the rest of the cast. 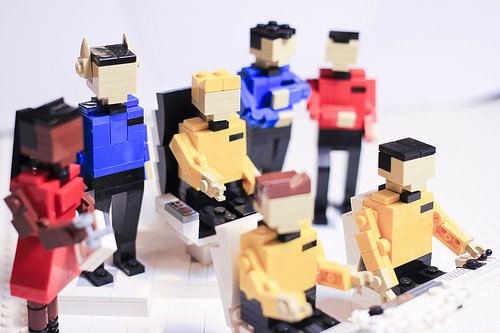 Ryan Ziegelbauer (rionz) has recreated all of them in miniland form. Despite the limitations inherent to building miniland figures, to me they are all instantly recognisable. The only thing missing is a cardboard set that wobbles slightly!