Sometimes LEGO builders drop off the map all of a sudden. Real life priorities take over or they lose interest. If the only way you followed the stuff that Ed Diment (Lego Monster) built was via flickr, you might think that the same at happened to him. To some extent it has. Ed’s real-life priority, however, is LEGO-related: he has become a professional LEGO builder, who, together with Duncan Titmarsh, runs a company called Bright Bricks. They also built the jet engine we blogged a while ago. Today, for the first time in a long while, Ed has posted one a new model on flickr. 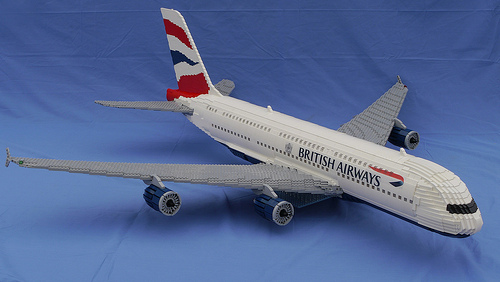 It is a 1/55 scale model of an Airbus A-380 airliner, commissioned by a toy shop in Heathrow Airport. I already saw pictures of this a few weeks ago, whilst visiting the Bright Bricks workshop, and have been eagerly anticipating blogging them ever since. I know from Ed that being a professional LEGO builder means often spending time building things that aren’t necessarily all that interesting as well as dealing with a lot of red tape, such as health and safety rules and planning permissions. Ed is an airplane buff, however. Back when his LEGO-building was just a hobby, he built a model of Concorde, for instance. It is no surprise then, that the Airbus was one model that he himself was looking forward to building.

The real aircraft is a bit of a blimp, but the way the difficult compound curves on the fuselage were sculpted, the way the wing profiles and engines were built and the wonderful Brick-built British Airways markings on the tail make this model a thing of beauty.