I’m probably in the minority of nerds who prefers the 1977 animated version of The Hobbit to the current overblown Peter Jackson spectacular, but I won’t let that stop me from posting great models based off the 7-part film series. This particular scene comes to us from Paul (Disco86), who uses some familiar but effective techniques to paint an immersive scene from the trailer of the latest installment of “The Hobbit“. The diorama is entitled “It is our fight” and it appeals to me in large part because there is nothing but Lego in the scene, no glaring white background, kitchen table or Photoshop weirdness, just 100% mainline ABS goodness. There is also a nice technique I haven’t seen before involving flower-petals and green string. I’m guessing that’s Legolas on the right, probably saying something incredibly clever like ““There is a fell voice on the air” or “A shadow and a threat has been growing in my mind”. Oh Legolas, won’t you ever lighten up? 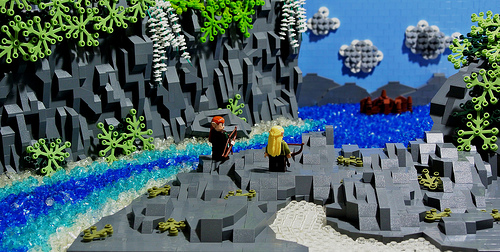 4 comments on ““”Then I have guessed your riddle. You are one of those miserable tub-thumping Lake Men!””