The title of our next featured model sounds more like the name of a module from Dungeons & Dragons, filed right next to “Shrine of the Kuo-Toa” or “Queen of the Demonweb Pits”….not that I would know anything about such a dorky game. The diorama was designed by lisqr, who really shows a mastery of how to compose a shot here. The purists among you need not fear, the swords are stuck in the gaps between log-bricks and do not appear to be cut, glued, or otherwise mangled. One of my initial reactions was to admire the builder’s choice of having only one minifig present in the expansive scene, it really adds to the desolate feeling of the diorama. You can’t actually see him in this photo, he’s just off-screen to the left, but you can get a better view in lisqr’s full set. This shot just appealed to me the most, even with the ghostly light-switch in the background it’s a critical hit! 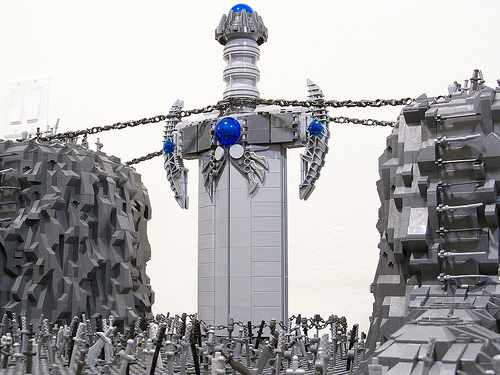