One of the things I noticed fairly soon after I moved to the UK (not being a native speaker of English) was that, despite being taught English in school, watching too many American TV series, reading English books and being able to hold my own in conversations about my work in English, I still had some gaping holes in my vocabulary. My job in the UK involved doing experiments in a wind-tunnel, which included working closely together with lab technicians. I could handle their southern English accents, but the names of tools were often completely beyond me, apart from really obvious ones such as a hammer or a screwdriver. If MacGyver never used one, I was basically lost. 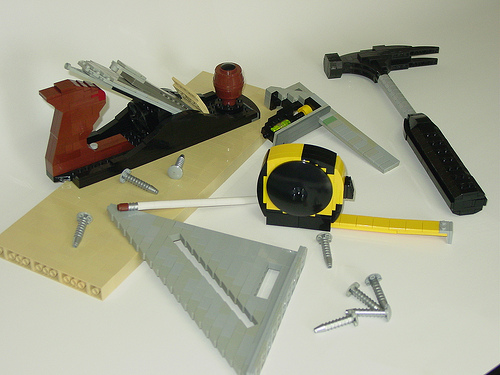 David Hawkins (davidhawkins. 1964) has built these very accurate-looking carpenter’s tools in LEGO, which, besides being nice and decently photographed models, instantly reminded me of the time I didn’t know what a wood plane was called and went: “It’s one of those things you use to remove the surface of wood”, only to be handed a chisel. Anyway, you try to name all of these tools in a language that isn’t your own!

3 comments on “The right tools for the job”