If, like me, you’re into LEGO aircraft models, this week is off to a rocking start. Yesterday I had the pleasure of featuring mrutek’s P-51 Mustang; today I am happy to present the P-61 Black Widow by Sydag. 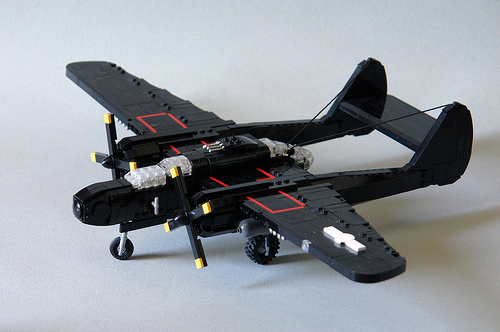 The first radars entered operational service prior to the Second World War, but during the war the equipment became sufficiently compact to be fitted to aircraft so that they could find targets at night. However, radars were still fairly bulky and interpreting their signals was a fine art. Some single-engined single-seat fighters were equipped with radars, but most night fighters were bigger twin-engined machines, with a dedicated radar-operator in addition to a pilot. The P-61 Black Widow was the US Army’s purpose-built night fighter, used during the latter part of WW2. It carried a gunner as its third crew-member.

Having built my own version of the P-61, I can really appreciate the shape of Sydag’s model. Our models are similarly sized, but because he has decided to forgo having space for a minifig crew, the fuselage on his model looks far more accurate and elegant. It’s sinister and beautiful at the same time.