I have come to admire mrutek for his models of some of the lesser-known aircraft of the Second World War, such as the A-20 Havoc and the Yakovlev Yak-1, but he has now turned his attention to a rather more famous aircraft: the P-51D Mustang. The P-51D combined a license-produced Merlin engine (famous for its use in the British Spitfire) with an airframe that could carry enough fuel to fly all the way from England to Berlin, escorting bombers. Nonetheless, the aircraft was sufficiently fast and agile to take on the best the Luftwaffe could throw at it. The P-51D was the first Mustang version with a bubble canopy, that offered excellent visibility to its pilot, and is an aviation classic. 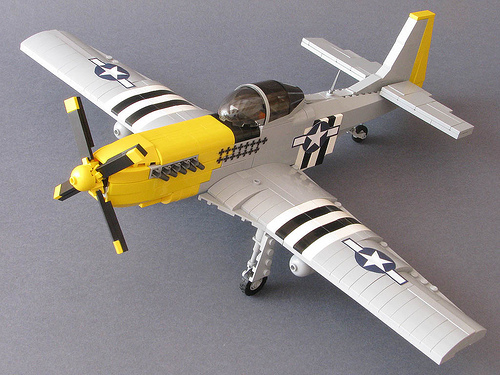 The model carries very attractive markings similar to those of the USAAF’s 361st Fighter Group on D-Day, with its yellow nose and invasion stripes. It’s not all perfect, though. For instance, I think the nose is a bit too long and should curve upward more at the bottom (I have purposely chosen a picture where this isn’t obvious). I also think that the distance between the leading edge of the wing and the front of the canopy should be a bit bigger. I know that building WW2 fighters isn’t easy, however, and overall this is an instantaneously recognisable model with some very nifty techniques.