You can’t stop Ryan McNaught (TheBrickMan), you can only hope to contain him. Feast your eyes on Ryan’s LEGO Acropolis, currently on display in the Nicholson Museum in Sydney as part of their “Etruscans: a classical fantasy” exhibition. According to the museum’s website:

Following on from the extraordinary success of the LEGO Colosseum in 2012, the Brickman, Ryan McNaught, has turned his hand to one of the most iconic architectural monuments of Ancient Greece – The Acropolis!

The LEGO model displays the Acropolis both as it was in the fifth century BC and as it is today as one of Greece’s most popular tourist attractions. Captured in LEGO are some of the Acropolis’ more famous visitors including Pericles, Lord Elgin, Dame Agatha Christie, and even Elton John.

Also on display is the museum’s 19th century model of the acropolis, which captured the acropolis as it stood in 1895 in plaster.

Ryan’s awesome work will be on display through June of 2014, but if you can’t make it in person, be sure to check out the full set of photos over on Flickr. 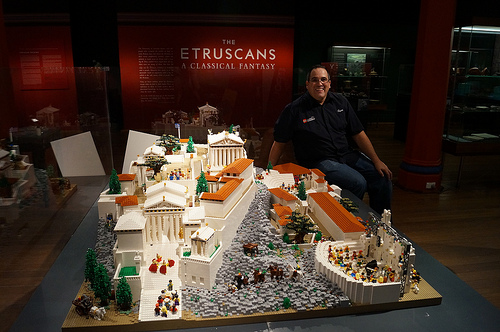