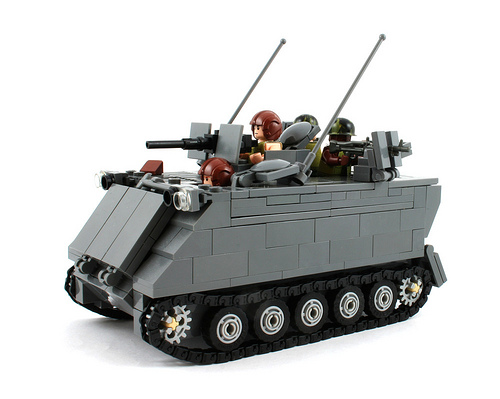 There wasn’t anything I wanted to compare and contrast, nor do I want to reveal any secrets by posting a breakdown photo, so I’m using Dan Siskind’s own photos, which are excellent and accurate.

The M113 armored personnel carrier has been in service for more than 50 years, serving through the Vietnam War and Gulf War before being phased out in frontline US service by the Bradley. Alongside the Huey, the M113 is one of the more iconic vehicles of the Vietnam era.

To be honest, I’m more than a little conflicted about the rise of Vietnam-era LEGO models in recent years. I’m probably better-informed about the Vietnam War than I am even about World War II — I’ve read Stanley Karnow’s Vietnam: A History,

Philip Caputo’s A Rumor of War,

and more. Sure, I’ve watched all the usual movies about the war and its aftermath, but it’s been documentaries like National Geographic’s Inside the Vietnam War

that have brought home the true horror and complexity of a war that still feels unresolved.

Nevertheless, Dan Siskind was kind enough to send along a copy of his M113 ACAV together with the World War II kits I reviewed previously, suggesting that it might be interesting to review something more modern. I agree, and I can certainly appreciate an excellent LEGO model even if — maybe especially if — the subject matter isn’t one I’d normally choose to recreate in LEGO myself.

Like all of the Brickmania kits I’ve reviewed so far, the M113 is full of functionality. All the hatches open, and the rear door even has a smaller hatch built into it that opens separately. Inside, there’s room enough to seat 10 minifigs. 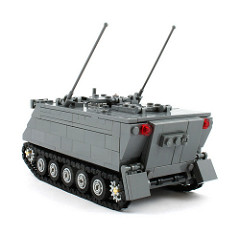 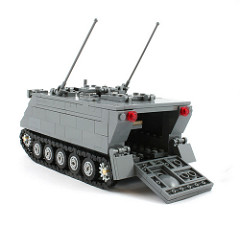 Brickmania sells two versions of the M113 — a basic M113 APC and a “limited edition” ACAV (armored cavalry) version that I’m reviewing today. To my taste, the basic APC kit reminds me a bit of a plain square box — which, to be fair, accurately reflects the source material. So I was glad Dan sent the ACAV version. (By the way, the “plain” M113 APC is discounted on Brickmania.com as of May 14 by $15, down to $130.)

In addition to the base APC, the ACAV version of Dan’s kit has additional features and accessories, including a pair of BrickArms M60 machine guns, Browning M2 .50-caliber machine gun, lots of brick-built armor for the guns, and four unique minifigs. The ACAV version costs $255.00, or $110 more than the non-sale price of the “plain” version. As a point of comparison, custom minifigs alone usually cost about $20 each, and the more-expensive kit includes four of them.

The minifigs are notable for a couple of reasons. First, they’re all wearing custom flak jackets created by MMCB Capes, and two of the figs sport BrickArms M1 pot helmets custom-printed in camouflage by Citizen Brick. Second, one of the minifigs is African-American. 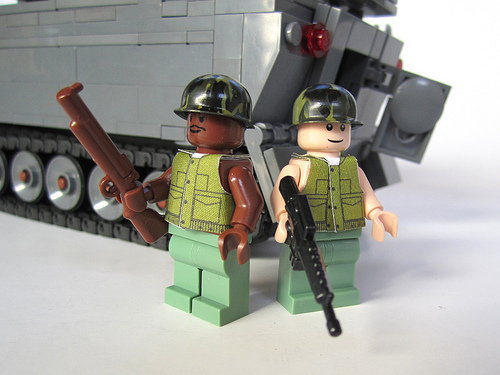 The actual kit doesn’t come with these two BrickArms guns, but this photo of the prototype Brickmania M113 is good for illustration purposes.

Thanks to racist recruiting practices, even by the time segregation of the United States military ended shortly after World War II, African-Americans were severely under-represented in the armed forces. But by the Vietnam War, African-Americans — who made up 11% of the US population at the time — constituted nearly 13% of those who served during the war (racism having taken a different turn in the intervening 20 years). It often baffles me that LEGO military builders fail to reflect the true diversity of American service personnel, so Dan’s choice to include an African-American soldier in his M113 kit is notable for its inclusivity.

Setting aside geopolitics and socioeconomics and getting back to the build, though, Dan’s design includes some subtle or surprising techniques for such a boxy shape at the end. Like the M2A4 Light Tank I reviewed a couple weeks ago, the suspension incorporates half-stud-offset techniques to get the road wheels’ spacing right. There are even a couple of brick-stressing combinations that you wouldn’t see in an official LEGO set. For example, a section built from angled plates on the APC’s front pressed the first row of sloped bricks up until I built the final row of slopes on top. But in the end, the model is very sturdy and playable. 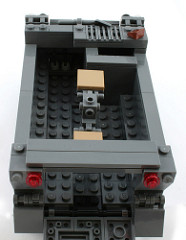 It’s obvious that Dan designed the Brickmania M113 with playability in mind. The top of the APC pops off cleanly for straightforward access to the interior.

One very minor complaint is that I had to pull a couple of random bricks from my own collection in order to elevate the driver minifig up through the front hatch. (You can see the driver’s station on the floor of the APC in the photo on the right, behind the levers.)

If you had no LEGO bricks at all yourself before getting this custom kit, you might be frustrated by the inability to make the driver appear as he does on the box, but for anybody with a spare 2×3 brick, this is no big deal. Still, I thought it was a little odd that the separate packet of ACAV extras didn’t include a brick or two to build a seat for the driver (who isn’t included in the “plain” APC version).

Overall, this was another Brickmania kit that provides an excellent balance of scale, detail, functionality, and sturdiness. Even though the source material isn’t from a historical era in which I’ll be doing much building myself anytime soon, I can heartily recommend the custom kit itself. And besides, every minifig militia needs an APC or two in its motor pool for the next inevitable zombie apocalypse.