Stephen 趙(Chao) (obscurance) makes his first appearance since 2009 on this venerable blog, with this gorgeous “Savoia S.21“. The S.21 is a fictional seaplane / fighter that appears in the anime Porco Rosso, directed by Hayao Miyazaki.

According to Wikipedia: “While the plane depicted in the film never existed, Savoia was an actual Italian aircraft maker which produced a considerable number of flying boats in the 1920s, during which the film is set. An actual Savoia S.21 even existed, though the fictional one does not closely resemble it—the Cant.Z 501 “Seagull” is probably the closest real-life match. As a matter of fact, Hayao Miyazaki is said to have drawn his Savoia S.21 from his childhood memories of Macchi M.33.” 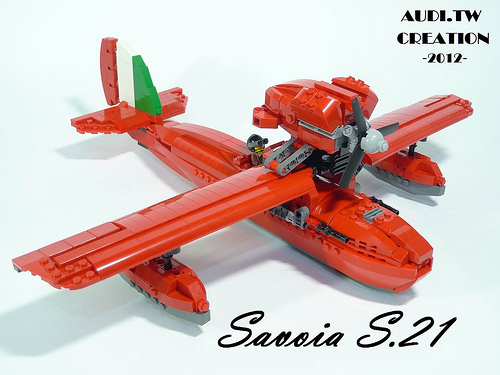 Constant readers of the blog will no doubt be familiar with this model, as 4 outstanding builders have taken a shot at the Savoia over the years. When I discovered how often the Savoia had been featured I was tempted to send the draft to the trash can, but I enjoyed seeing the unique approach used by each builder over the years and hope that you will too.