and for pre-order on Amazon.com.

This is the biggest set in the line of licensed sets from Man of Steel, the new Superman movie due out in June. 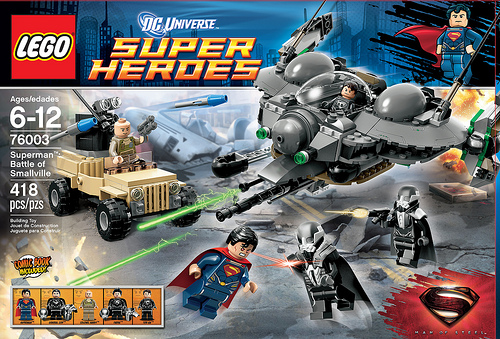 The 418-piece set features a military jeep with missile launchers and the “Black Zero” drop ship, a Kryptonian fighter ship. There a 5 minifigs included: Superman, Colonel Hardy, General Zod, Faora and Tor-An.  At that price point, the set is fairly reasonable, given the part count. 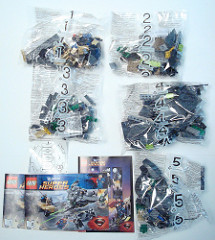 The set comes with 5 polybags of parts, 2 instruction books, stickers and a comic.  The first part of the build is the military jeep.  It’s simple but nicely designed, employing clever SNOT (Studs Not On Top) techniques. The jeep comes equipped with a pair of flick-fire missiles for its play action. Flick fires are never that interesting in my opinion.  The first set of figures are Superman, sporting torso and leg prints based on the movie,  and Colonel Hardy, who sports a military-style torso print that might be of interest to military enthusiasts. 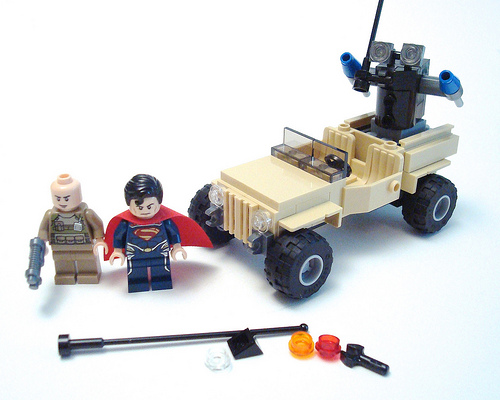 The second part of the build is the Black Zero Drop Ship, not to be confused with the Black Zero, which is a gigantic ship in the movie. The minfigures here are particularly noteworthy as they contain a number of new molds.  Zod and Faora each have their own styles of body armor, as well as new helmet pieces.  Faora appears to have a new hair mold as well. And finally, there is a new blaster weapon. 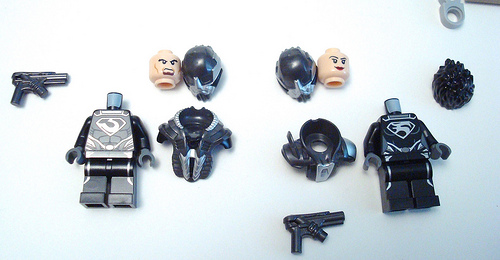 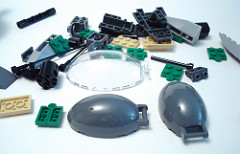 One particularly noteworthy element is the dark grey bubble canopy.  While it is not a new element, the color is new, and should lend itself to some creative uses.  Building the dropship is straightforward enough; it only took about 15 minutes to do it. The finished ship is definitely swooshable, and it comes with two spring-loaded missile launchers for its play action.  While I’m sure the set was designed to reflect the movie’s look, the end result is largely colorless —  it’s mostly dark grey with a few tiny green accents. I somehow get the sense that the designer’s hands are tied on this one, given the source material. 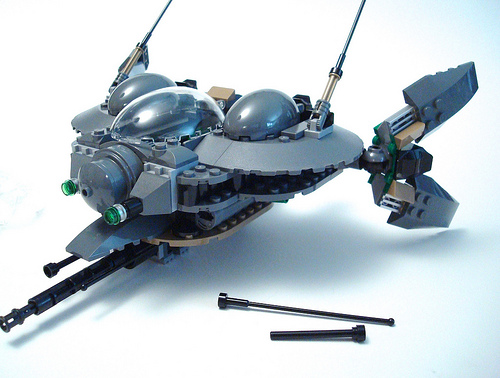 The set is a fair value.  If you are a fan of the movie, or a fan of Superman, then you would probably appreciate the set.  The set is not a standout in terms of the color design.  The predominantly grey palette is a little dull. But my kids, as I suspect with most kids, don’t care about design details.  They’ve been playing with the set non-stop ever since we finished building it. 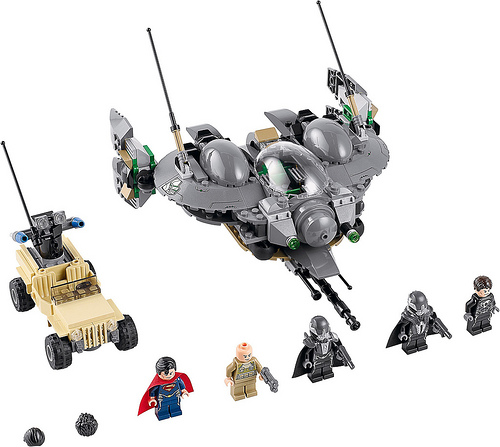