A few years ago, while I was still living in the UK, my neighbour Jon and I took Becca, his six-year old daughter, to see LEGOLAND Windsor. I had spent way too much money at their shop during their Christmas shopping a few months before and had ended up getting two annual passes, as well as several discount vouchers through shopping at LEGO on-line. Furthermore, while I had been to the park several times before, this was never when it was actually open to the general public.

It was fun to see the park in operation and all the children and parents enjoying themselves, but two things stood out to me: girls like pink (and Dora the Explorer) and girls do get what LEGO is about if they are presented with it. The former was driven home to me when we were in an outdoor play area. Becca ran off to play with the other kids. I said to Jon: `don’t worry, we’ll find her. We’ll just have to keep an eye out for a little girl wearing a pink coat and a Dora the Explorer backpack’. We looked around, somewhat oafishly. Almost all the little girls were wearing pink coats and Dora the Explorer backpacks! The latter became clear in one of the indoor play areas, where parents and their children could build small cars and race them down wooden slopes. After having retrieved Becca, we spent at least an hour there. She loved every minute of it and so did we.

As I’m sure many of you know, LEGO’s girl-friendly Friends-line has been very successful, despite the toy being criticised for supposedly reinforcing girly stereotypes. Yes, the sets have pink and purple elements (girls like pink) and it does have cutesy figures, but ultimately it’s about getting girls to build and play with LEGO (and girls do get LEGO if they are presented with it). I think LEGO has expressed this very well in a new magazine ad, posted on flickr recently by LegoMyMamma. 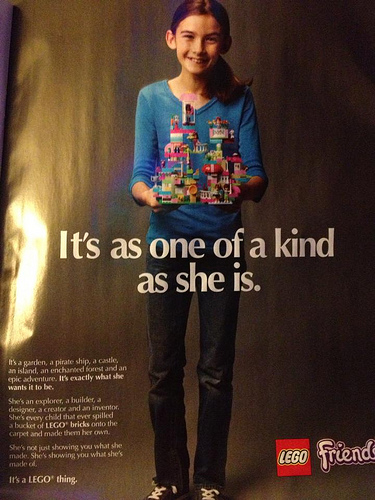 I love how the ad captures the spirit of the old advertisement of a girl holding up her LEGO model and clearly makes the point: critics be damned, it’s exactly what she wants it to be.

I realise, of course, that the quality of the MOC and photography may not be quite up to our usual standards and that not all girls like pink.