Last weekend a number of Dutch truck building enthusiasts, including yours truly, met up to display our models at Model Show Europe, as I mentioned in my introductory post a few days ago.

The show is for scale models of heavy haulage and earth-moving equipment and, perhaps surprisingly for such a niche interest, it’s big with a few thousand visitors on a single day and exhibitors from several countries, including Germany, the UK and Denmark. Most of the models on display were plastic kit models and die-cast models, but, because of their high quality, the LEGO models on display didn’t look out of place at all.

TBB favourite Dennis Glaasker (Bricksonwheels) showed off his love for chrome with his latest Peterbilt and trailer. 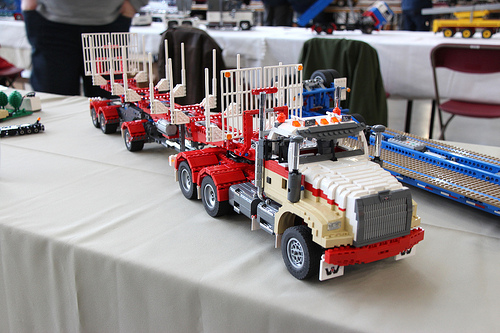 Dennis Bosman (legotrucks), whose Kenworth wrecker truck was featured here a few weeks ago, also brought his impressive model of a Scania R500 with a low-loader and drag-line. 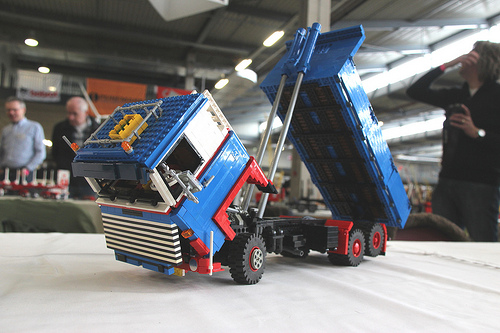 It’s still a work in progress, in the sense that it cannot yet be raised, but already looks impressive.

For more pictures taken during the event, including more trucks by Daniël Dil (Legorigs), Barry Bosman (Barman76), Ron Jansen and myself, check out the other pictures in Barry’s photo set. As George Panteleon (ZetoVince) put it in a comment on a picture of part of the display put it: “Lucky guyz! So many fantastic lego car builders in one country! I’m jealous..”