While Tim may just be rediscovering him, Erik (Lemon_Boy) has been hard at work churning out a new series of builds in a tweepunk universe he’s calling “Awfulworld”. 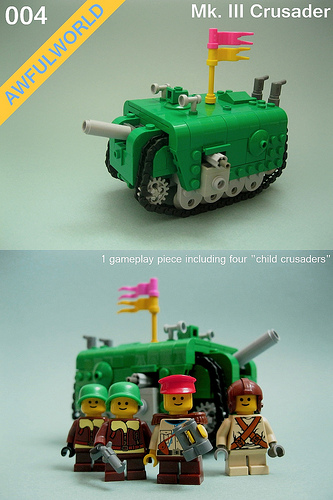 Adorable tank with an adorable crew? Read the backstory:

Young conscripts were ideal for tank crewing, as pubescents’ junior volumes were wholly appropriate for the cramped, unaccommodating interiors of armored fighting machines. Thus, a solution was provided to the over-crowding of orphanages in the Kings’ bomb-ravaged cities; dutiful young men and women “graduated” from the orphanage halls and were drafted into the ranks of the mechanized corps.

One such figure was Dominik Krotshad, who by the age of fourteen had become an accomplished tank ace during the Spice Wars. He was killed in action nineteen months later during the campaigns of the rogue Herzogstädte, one week before his birthday. He would have been sixteen years old.

There’s a lot of commentary built into Erik’s model and presentation, touching on LEGO fandom’s obsession with war (tanks in particular), the steampunk aesthetic, and the archetypal teen warrior prevalent in much of anime.

Erik has a lengthy write-up on twee affect about his build process, real-world inspiration, and LEGO influences. It’s less heartbreaking than his backstory, and well worth a read for those out there interested in how a LEGO builder approaches creativity.