Last October at BrickCon 2012, Seattle-area builder Alice Finch unveiled what just might be the largest LEGO structure built by a single person, a near-complete minifig-scale rendition of Hogwarts School of Witchcraft & Wizardry from J.K. Rowling’s Harry Potter series of books and the corresponding movies. 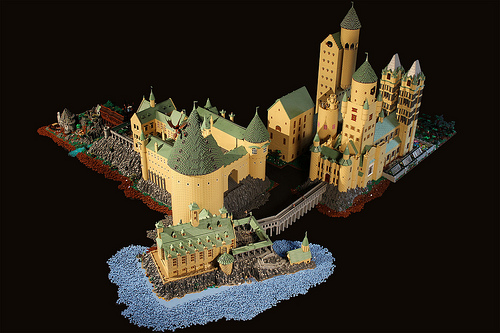 Alice’s Hogwarts took home both “People’s Choice” and “Best in Show” – a rare combination that demonstrates not only how massive Hogwarts is (“People’s Choice,” voted on by visitors during the public exhibition, invariably goes to the single biggest LEGO model in the exhibition hall) but also just how well-built and detailed it is (“Best in Show” is voted by all convention attendees). 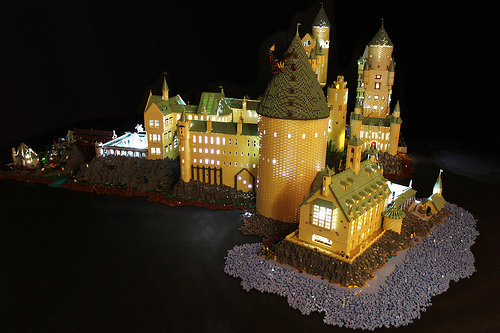 There’s a reason it’s been nearly five months between BrickCon in October and the online unveiling of Alice’s LEGO Hogwarts today — assembling such a huge LEGO structure in the family living room and taking decent pictures of it is virtually impossible. But with help from Carlyle Livingston II (whose collaborative LEGO Batcave build with Wayne Hussey we featured here last fall), Alice’s Hogwarts is ready for its moment in the spotlight.

I sat down with Alice before a recent SEALUG meeting.

The Brothers Brick: How long did it take you to build your LEGO Hogwarts?

Alice Finch: I spent 12 months building over an 18-month time span (I was out of the country or working on other projects for the other 6).

TBB: Do you have any idea how many bricks you used?

AF: 400,000 bricks give or take a few. When dealing with this large of a structure, it is very difficult to know how many bricks there are. Some experienced builders have said more, some less, so this is about the middle of the guesses. I do know there are about 10,000 bricks just in the big central staircase to give you a sense of scale. It is built in the shape of an L, where each side is about 13 feet (nearly 4 meters) long. 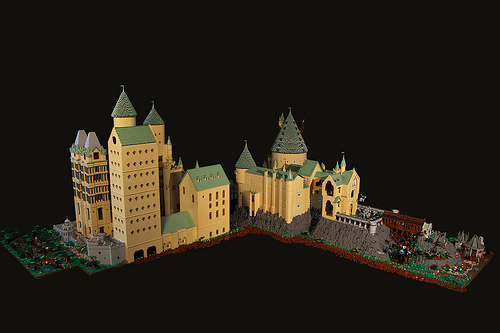 TBB: That’s a lot of bricks. How much did it cost, and where did you get all that LEGO?

AF: I do not know how much it costs and I don’t really want to know, although lots of other people do. I have ordered most of the tan by the box, and many other parts by the hundreds or thousands from all over the world. For example, most of the sand green roof slopes came from Germany.

TBB: What I love about your Hogwarts is that it’s not just big, it’s full of wonderful detail, both outside and inside. What are some of your favorite details, and how did you approach the inevitable research?

AF: I did quite a bit of research in the books and movies looking for the smallest of details, things like the old fashioned slide projector in Lupin’s Defense Against the Dark Arts class, the location of the potions class, and the wood paneling in the charms classroom. 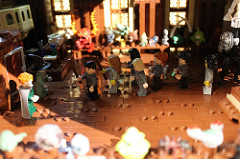 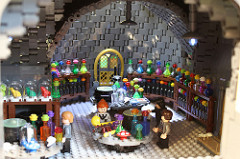 Much of the time, the book and movie don’t align, so I had to choose what worked best. For example, in the book, the Gryffindor common room is over by the hospital wing as a corner tower, but the tower with the four corner turrets from the movies was visually more important than relative location, so I put it in its own tower like the set. 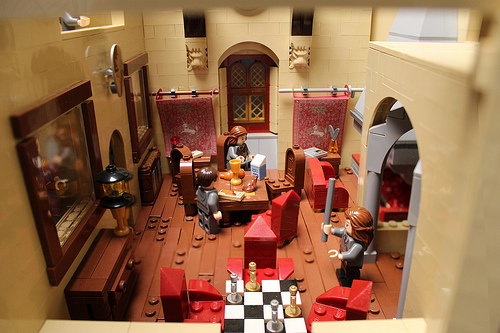 TBB: What sort of research did you do beyond the books and movies themselves?

AF: I also went to the Harry Potter studio tour in London to see the sets in person. This was tremendously helpful because some sets are only shown from certain angles and seeing them in person meant I could fill in the gaps and take hundreds of photos from all angles. They even had a room full of the architectural drawings! The last room had the model they built for all the wide shots for everything but the last films. It was quite a sight as it was enormous and meant I could get my own photos of panoramas and small architectural details.

TBB: You have two young sons, and I’m sure LEGO has been in your house for many years. How did you get into building yourself?

AF: I started building about 5 years ago when I was spending a lot of time with my older son in our Lego room. He was doing the building; I was doing the sorting and putting away. After a while, I realized that I really wanted to build too. I haven’t built since I was a kid and once I started building again, it occurred to me that building with my son had important implications. We were spending time together doing something creative, learning techniques and sharing ideas in a very productive way, and, although I didn’t really think about it at the time, I was showing him that moms can be pretty darn good at putting bricks together too. 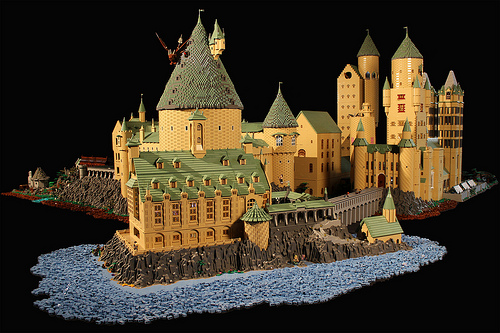 TBB: What inspired you to tackle such a monumental project?

AF: After a year or so of getting back in the building groove, I started collecting the Harry Potter sets, but I soon realized I was not satisfied with them. I understand why Lego makes sets that are only finished on one side and accessible on the back, but I’ve been to many of the places in Oxford where they filmed and I knew what they really looked like and I wanted to build my own version that was architecturally accurate with 4 walls and a roof, minifigs scale, and also playable for big and little hands. I started with the Great Hall, partly because I’ve eaten in the Dining Hall of Christ Church College that inspired the movie set, and partly because it would establish the scale for the rest of the castle. It had to have 4 tables where students could sit, and it had to have plenty of exterior and interior architectural details. 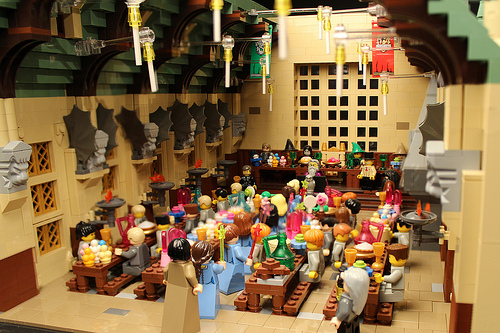 When the Great Hall and the rocks that went under it were finished, I kept looking at it thinking, wow, this is huge! How am I going to build the rest of this since it already takes up my entire Lego table? I tried to figure out how to make it smaller, but since it worked just the way I wanted it to, I just let it be. After the Great Hall, I built the big round tower, and then the building with the challenges for the Sorcerer’s Stone, the Quidditch Courtyard, Hospital Wing and bridge over to the Clock Tower and Courtyard. That is all I managed to finish in time for BrickCon 2011, but I learned an awful lot about substructures, building rocks, and just how much time and material it takes to build a large-scale project. 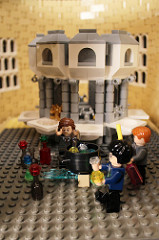 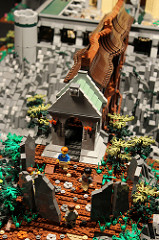 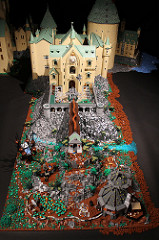 TBB: The first stages of Hogwarts you shared at BrickCon 2011 were certainly impressive. But you kept right on going!

AF: I continued on by finishing the sides of the courtyard with the Chamber of Secrets and the archway. Even though I took a few months off here and there for various reasons, I was pretty much always thinking of how to solve a tricky building situations, like how to get the beams in the Defense Against the Dark Arts classroom just right (lots of brown legs) or how to build the Cornish pixies (I looked through all the parts made in blue, ordered the ones that I thought might be useful, and puzzled it out.)

In May I realized that I had so much yet to complete on my ever growing list of scenes that I wanted to build that I had to kick it into turbo build mode or else I would never finish in time for BrickCon 2012. So, from May until October, I stayed up until 1 or so in the morning building lighting into the floor of the Room of Requirement, a forest for the thestrals, library shelves, and a tower of pink cups in Divination,. 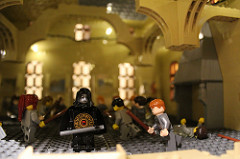 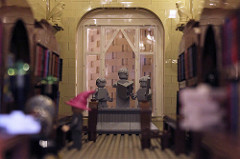 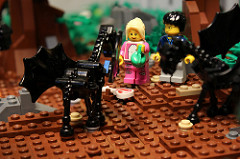 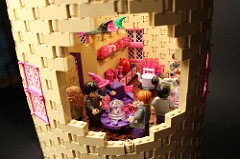 When I could, I’d build during the day with my two boys in the Lego room, doing things like building the layer upon layer of the now even bigger central tower that would accommodate moving staircases and portraits in the walls. I was pretty tired of course after months of staying up late, but I think adrenaline kept me going. I just had to finish and so I kept working until I did.

My older son likes setting up scenes so he posed many of the hundreds of students and professors all over the castle. My younger son helped by testing the sturdiness of the buildings, the usability of the classrooms, and he contributed several charmingly wobbly shrubs down by Hagrid’s hut. 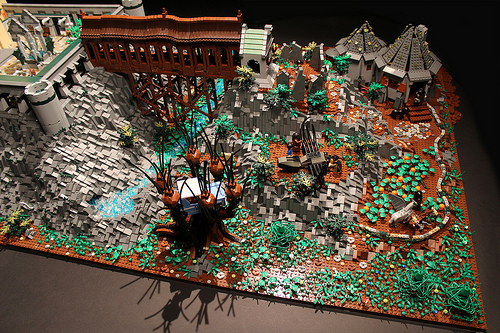 My husband helped where he could with things like the conical roofs (which were drat tricky to build), the harp in the room with Fluffy, giving a second opinion here and there, but mostly he helped by reading to me while I worked. That and never flinching at the enormous number of bricks that kept arriving by the box and oozing into all the rooms of the house.

The Future of LEGO Hogwarts

TBB: Your Hogwarts won both “People’s Choice” and “Best in Show” at BrickCon last October. Now that all these gorgeous photos are online, I suspect it’s also about to go viral. Did you have any idea it would become so popular?

AF: After building on it for this long, and being tired on top of it, I didn’t really have any idea of how it would be received by my peers. I had invested a tremendous amount of effort (and money) into it because I loved building my own bit of reality for the world of Harry Potter and because I wanted my kids to be able to play in all the spaces where the story takes place, but I didn’t really think about how others would view it. Enormous perhaps, but beyond that, I just didn’t know. 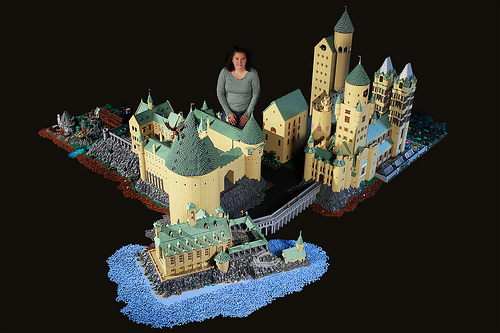 TBB: What do you have planned next for all the bricks tied up in Hogwarts?

AF: I don’t plan on taking it apart anytime soon. My older son has read the books and has enjoyed playing various adventures all over the castle. Even though my younger son hasn’t read the books, he has seen snippets of the movies and a lot of the books and pictures that I used as reference and so he has gleaned enough to happily play along. When he is old enough to read the books, then the sections of the castle will come out from under their dust clothes and courtyards and forest from their boxes to be played with anew. 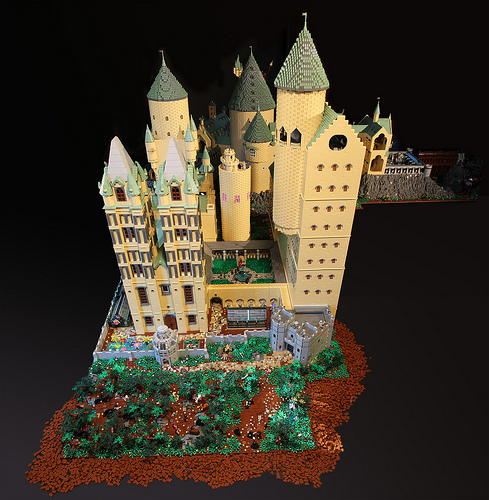 Be sure to check out all 75 photos in Alice’s Hogwarts photoset on Flickr, and come see it in person at SEALUG’s LEGO display at Emerald City Comicon in Seattle this weekend!