My next guest destroys the long held belief in the community that a builder must always keep the proper signal to noise ratio. Although Leigh Holcombe has a stable of well built and some might say handsome models, he may be best known for his numerous postings in various LEGO related fora. Armed with a sharp wit and a willingness to use it, this keen observer of the community has made his own mark through the years. I caught up with Leigh, better known as worker201, on a barren stretch of flatland about halfway between Houston and Waco Texas. We talked about the ELF, the WTO and ELO. We also talked about LEGO. 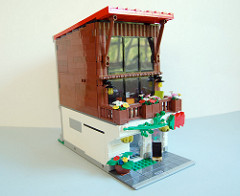 KG: Your early builds were mostly in the sci-fi or military genres, but then you switched to chairs and a bit of town with J-Flo’s flower shop. Was there a reason behind the switch, and in a perfect world, what direction appeals to you the most? Do you think builders in general, get too locked into one genre?

LH: I think sci-fi is the geek default, because the designers in that field literally get paid to ignite the imaginations of their audience – being inspired by that genre is so easy. It’s a lot harder to get inspired while walking through IKEA, but I swear it does happen. 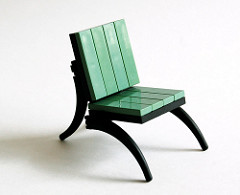 I think this hobby is a textbook cross-section of different levels of obsession and focus – of course some builders get bogged down in a single genre, and some can’t sit still long enough to even have a genre. I’m somewhere in the middle – eventually, I’d like to build something castle or train, but I’ll probably make more spaceships too.

KG: Many young builders begin by recreating the work of builders who came before them. You, however, came in on the ground floor of the hobby or very near to it, so where did you look when you started building?

LH: When I was a kid, back in the late 70s, there was nobody else – just me, the bricks, and the back of the box. I think that’s how it was for most AFOLs. My dark age ended when the Star Wars sets first came out – I couldn’t believe how awesome that first Snowspeeder set was. Then I got on the internet and found Shaun Sullivan’s AT-ST , which was really inspirational to me. He posted instructions for it, and they helped me to remember all the techniques I had forgotten. Realizing that something so awesome was made with basic bricks attached with normal clicking techniques really flipped a switch for me.

KG: Whether it is a job, school, deployment, health issue or even a stay in prison, like many builders, you have been in a position where you want to build for an extended period of time but have not been able to. As the time goes by does it make you think about LEGO more or less? Does it change your mind-set on building, and when you do get a chance to build, does it change anything?

LH: Oh, it’s tough. Lego is a creative outlet and a stress reliever, and not having it is like trying to quit smoking. Plus, keeping up with Flickr and TBB every day puts inspirational stuff in front of me all the time, and I can’t do anything about it. I have so many hypothetical projects lined up, and I’m afraid I’ll never get around to them. The only time I really get to build is when I visit my nephew – and then, I’m mostly making stuff to impress him, like big guns and weird minifig combinations. 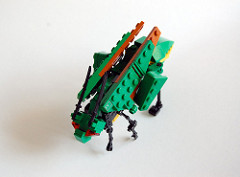 LH: I don’t know exactly what Janey and Ross were thinking when they started JLUG, but it pretty quickly became the home of community criticism. At that time, Lugnet and Classic Space Forums were dealing with censorship and leadership issues, and the people at JLUG seemed to enjoy calling out what they deemed hypocrisy and conservativism in those communities. After JLUG disappeared, a lot of its members decided that the group of people was more important than the site, so I took it upon myself to create a new home for “merry pranksters”. Someone accused JLUG once of being a ‘staging area’ where mischevious activists planned their shenanigans (not one of which was planned), which is where Stajinaria got its name.

Many of the core group are still internet friends today, but the mass migration of the community to Flickr made the forum extraneous, so I shut it down earlier this year. Both sites were based on the sandbox rule – if you don’t like the rules in someone else’s sandbox, make your own sandbox. AFOL 16+ was a sandbox that didn’t allow young kids, who were becoming an increasing annoyance in the Flickr Lego group. I think it started out with a bunch of venom and righteousness, but now I think of it as just another group of people who are familiar enough with each other to kid around and be sarcastic. (I also run Lego 35+, a place where grownups can interact, but nobody ever goes there.)

KG: It seems as though whenever an AFOL decides to make money in some way from the hobby that he or she is the inevitable recipient of scorn from a section of the community. Do you agree, and what do you make of this conflict between fandom and commerce? 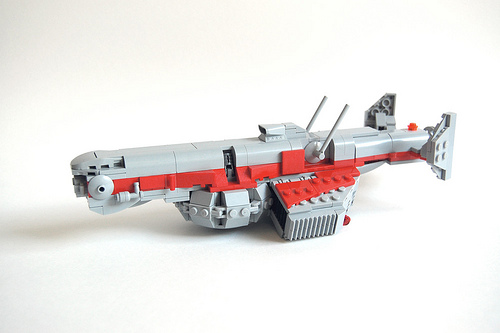 LH: Well, there’s jealous anger! But also: every AFOL is by default a consumer – we have to buy into the hobby. And it’s kind of an expensive hobby, so we tend to be very conscious of price:value ratios. For the most part, price:value ratios are set by the biggest player in the market – Lego. Independent sellers who don’t have economies of scale have to set very different price points for their products, and these prices usually result in jeers and guffaws from a market that can barely afford official sets. High prices seem greedy and exploitative, which brings out the masked avenger inside us all.

KG: Name two trends in the community, one you’d like to see more of, and one that you wish would go away.

LH: More banal objects – I like spaceships and castles just as much as the next guy, but every time I see something new from Bruce Lowell, my eyes light up. There’s something thrilling about seeing a known object rendered perfectly in Lego. Less theme-of-the-months – after a couple days, the deluge of sameness becomes repetitive and stale. There were some very nice Vic Vipers revealed in the final days of the recent NoVVember, but I don’t think I gave them the attention they deserved, just because I had seen so many already.

KG: What is your take on the recent feminist-driven controversy concerning the Friends line, and what direction would you like to see the line go?

LH: I get why Lego has decided to go in that direction; it’s a gamble that seems like it has paid off well. But I also get why some people are down on it – it just seems like more of the same from what they thought of as a progressive company. I hesitate to dismiss the critics outright, but I think the market evidence is clearly against them – girls are getting into Lego now. My young niece adores the line, and it has gotten her more interested in playing Lego than her older brother’s Ninjago collection ever could. If I felt that the Friends line really was a key piece in the continued domination of women by the patriarchy, I’d be against it in a heartbeat. But it’s not – right now, it’s just a great new way to trick girls into liking construction toys, something very few companies have been successful at. By making one of the first sets a robotics lab, they sidestepped a potential line of criticism, and I’d like to see them continue to include challenges like that in future sets. 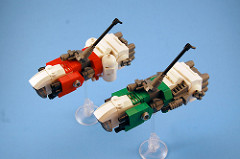 KG: Geek Culture is enjoying a great deal of popularity in the US and elsewhere. Do you think LEGO has profited from this fad, and do you think we’ll see a big drop-off of builders when it is inevitably replaced?

LH: It’s hard for me to see it as a fad – I’ve been a geek for decades. I suppose the fad is the market saturation from top to bottom – everybody knows who the X-Men are now, which definitely wasn’t the case when I was younger. I think Lego has profited from this – they seem to be in the right place at the right time with their product licenses – but I haven’t seen any cash-grab profiteering from them. Lego has been smart enough to cultivate their base demographic and maintain their core business. I don’t think a sudden implosion in the marketability of The Avengers would tank their prospects. 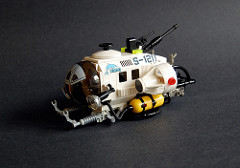 KG: How do you see LEGO’s role with the adult fan base developing as time goes on and given that the hobby keeps increasing in popularity?

LH: Slowly, over time, I have come to realize that catering too much of Lego’s business toward adult fans would be catastrophic. So many adult fans are wildly myopic when it comes to their place in the Lego market. We want all pieces in all colors at cut-rate prices, and who cares what kids think? As I said above, Lego has to cultivate their base, and that base is little kids. Fortunately, some set designers are sneaking cool pieces in rare colors into sets, as a treat to AFOLs. And of course the big sets, like the Star Wars UCS and Cafe Corner-style buildings, are probably not popular with youngsters (or their parents’ budgets). But I think the key to placating adult fans is communication. Mark Stafford mentioned once that parts storage was a big problem at the Lego factory, and just thinking about the scale of the problems they were facing really put a lot of my snivelly wants into perspective. Many employees are actively out in the community, addressing customer concerns in a non-business way, and it costs the company nothing.

KG: If you had to select just one of your models for enshrinement in the great FOL Time-Capsule, which would it be and why??

LH: The Great North Combo. The truck and the boat both represent some of my finest detailing work, but stacking them on top of each other was just crazy enough to succeed.

LH: I had an idea for a Cafe Corner-stlye bookstore that I never followed through on, that would be amazing. I’d also like to do a Star Wars UCS Speeder Bike.

KG: Taking time, money and proximity out of the equation, name 2 builders that you’d like to collaborate with on a project?

LH: I’ve never built with anyone before, so it would probably be awkward to start with. Building has always been a very private experience for me. But I really like Andrew Lee’s approach to sci-fi. And I would kill for an apprenticeship in Deborah Higdon’s furniture factory.

LH: Chuck Jones– I bet he could turn this hobby on its head in a matter of weeks.