I suggested yesterday that 79003 An Unexpected Gathering might be the best LEGO set of all time. I wasn’t kidding (it’s definitely my new favorite), but I don’t think all of the sets in the new Hobbit line are the stuff of legend.

isn’t the worst set of all time, but I can’t really recommend it for anybody but completionists.

This set felt too much like many other “trees on bases” sets we’ve seen over the years. Worse, the spiders are basically scaled down versions of Shelob, and you spend about a third of your build time making two identical arachnids.

Unlike the brilliant window in Bag End, I didn’t encounter any ingenious building techniques, and the play features are what you’d expect — pull a pin and the tree falls down.

The minifigs are certainly the highlight of the set — an elf named Tauriel (not from Tolkien’s book), Legolas (who’s not in the original book), and the dwarves Fili & Kili. In a mostly black set, they bring about the only color, further emphasizing how much the spiders and trees feel like background for the four minifigs.

Legolas has his longer bow, while Fili & Kili have the older-style LEGO Castle bows. LEGO must have a surplus of time-traveling daggers left over in their warehouse from the Prince of Persia sets, because Tauriel gets two of them. They sort of work as elven weapons, but they’re a bit jarring if you know their LEGO origin… 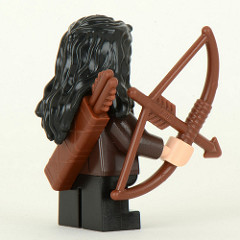 Edit: Fili & Kili have a hairpiece that might be the first long hair that allows the minifig to also wear a quiver for arrows underneath.

I’d break my self-imposed rule and post a picture of my own, but I’ve already packed this set away due to some flooding in my basement, so here’s a good photo from our friend Huw over at Brickset (who liked this set a lot more than I did, according to his review).

As you can see from the inventory pages, there’s a whole lot of black in this set. The two highlights are dark red leaves and printed tan mushrooms (2×2 radar dishes). 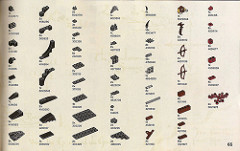 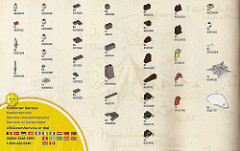 Edit: I forgot to mention the two little cloth bags that the dwarves go in when they’re all wrapped up by spiders. I don’t build with capes, rubber bands, or ship’s sails, so I think I subconsciously dismissed them without a second thought. They’re new, and certainly add some play value to the completed set. But I still stand by my original assessment that this is an overpriced fig/battle pack.

This official photo is a pretty good representation of what you get when you’re done building — four minifigs, two spiders, and two bases with trees on them. 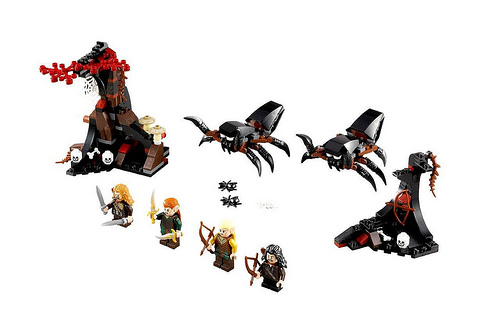 For $30, you get 298 pieces and four minifigs. That works out to almost exactly 10 cents per part, I know, but that’s a whole lotta black! (I just don’t find black a particularly useful or interesting color.)

Pass. I suspect this set might be the only way you’ll be able to pick up Fili & Kili for the time being, but the build is repetitive, the elf minifigs are non-canon (though they are elf minifigs), and the part selection is lackluster.

If you want a complete dwarf crew, wait for this set to go on sale.