LEGO sets for The Hobbit: An Unexpected Journey aren’t officially due out for another several weeks, but a local retail chain here in the Pacific Northwest has been putting the new sets on their shelves over this past week or so. I picked up 79003 An Unexpected Gathering

(Bag End) today, and I can honestly say that this may be my favorite LEGO set of all time.

Side note: The build process itself is part of the joy of a new LEGO set, so I’m not going to spoil the surprise or ruin the story (if you will) by sharing under-construction photos or shots of each minifig’s second face. Where’s the fun in that? The official photos are better than anything I’d take anyway, so read on…

What impressed me most about LEGO’s rendition of Bag End is that the designers frequently used brick-built techniques where a prefab part might have sufficed. The ramshackle fence in front is a gorgeous example of this, complete with gaps. Each section of fence uses 9 or 10 pieces where another set might have had a single prefab fence piece.

Before seeing any pictures of this upcoming set, I wondered how LEGO would handle all the round windows and front door. They succeed by a combination of a new 4×4 round plate with a 2×2 round hole in the middle in front of “normal” windows, an ingenious brick-built window that made my jaw drop (I won’t ruin it for you), and a large round tile with printed boards on it for the door.

Speaking of printing, the front door and a letter are the only printed (non-minifig) pieces in the set. There is a small sticker sheet for fence boards, the cover of Bilbo’s book, and three maps of Middle Earth on 2×2 tiles. I skipped the boards, but my only disappointment with this set is that we didn’t get printed maps of the Shire, Mirkwood, and the Lonely Mountain. The good news is that the stickers are clear, so you could put them on whatever you want (as I do with sci-fi stickers on all my spacecraft).

Another wonderful detail in this set is that the interior color isn’t just the same color as the exterior — green. There’s a layer of tan that encloses Bilbo’s quarters against the green hillside. And the hillside itself isn’t a uniform green; LEGO included both regular and bright green, and the little spots of bright green add excellent highlights. (Also, cheese slopes in both greens? Yes, please!)

It would be silly to expect that this set would contain all 13 Dwarves (plus Gandalf and Bilbo), so with realistic expectations for a set of this size, six minifigs is quite nice — Gandalf the Grey, Bofur, Balin, Dwalin, Bilbo Baggins, and Bombur (left to right in the photo below).

LEGO has begun dispersing its minifigs throughout the build experience, so you don’t get all of them until you open the fourth bag. By then, I was too excited about Bag End itself to care much about the minifigs, but like all the recent figs, they’re actually quite nice. 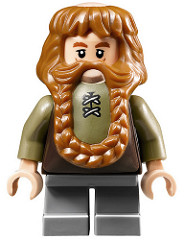 Nearly all of them have double-sided printing on both heads and torsos — Dwalin even has tattoos on the back of his head. For castle / medieval / fantasy builders, they’re a treasure trove of unique hairpieces, belted tunics, and grumpy old man faces.

My favorite minifig is probably Bombur, whose hair/beard piece has both a bald patch on top of his head and a rotund tummy beneath his beard. In the set, he’s given a pot and a large red sausage rather than weapons. Awesome!

Based on the quality of the dwarf minifigs in this set, I can’t wait to complete the rest of Thorin Oakenshield’s crew.

I’m not going to spend a lot of time going into all the individual parts in the set, but for those more interested in the set as a collection of its parts, I’ve uploaded the inventory pages: 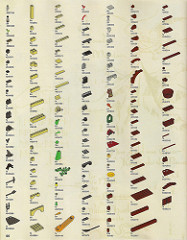 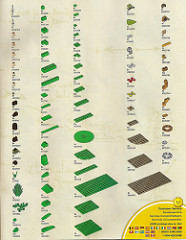 When the set all came together, I had the hugest grin on my face and couldn’t wait to show my wife all the cool details I’d built — I felt like a 9-year-old. First, the roof comes off for easier access to the complete interior.

Inside, Bilbo has a kitchen, writing desk, shelves, and a table laden with more food than I’ve ever seen in any other LEGO set (including a new pretzel). In a nod to The Lord of the Rings, Bilbo already seems to be working on his book, and Sting is displayed on a shelf. Back out front, there’s a lovely garden, complete with planted carrots and a bench on which to blow smoke rings with your favorite wandering Wizard. The overall rounded shape carries over from the door and windows, and looks exactly like a Hobbit hole should — a green door in the side of a hill.

Bag End is by no means a large-scale modular building, but thanks to all those thick walls, it has a heft to it that makes letting a child or younger sibling play with it not as tragic as with fiddlier sets. It’s also wide enough to look quite attractive on a bookshelf or mantle.

(Rant: A ridiculous and outdated standard, if you ask me. What, is LEGO going to stay the same price for these past 10 years as the price and scarcity of petroleum go up? What exactly is ABS made of, again? And how does it get transported to your house? Get real, people.)

At full price, I’m not sure I can recommend the set as a pure parts pack for landscape builders, but it’s a pretty good value for a licensed set. On discount, I’d even recommend this to non-Castle fans just for all that green, brown, and tan.

At any price, this is an absolute must-have set for every LEGO Castle and Middle Earth enthusiast. These days, isn’t that pretty much everybody?

This is probably the most iconic set of the line, so expect it go go fast when it’s out. We’ll let you know when the sets are officially released.