I recently took advantage of the free shipping going on right now to pick up 21101 Hayabusa,

the second project to receive the necessary votes and become an official LEGO set through the original Japanese version of LEGO CUUSOO.

Given the space fever I currently share with many of you, I thought I’d let you know what to expect if you order it yourself. 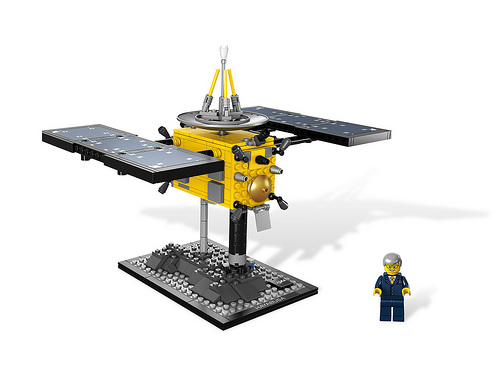 The instruction booklets for both of the LEGO CUUSOO sets I’ve bought (the other being the Shinkai 6500 submarine — the very first successful CUUSOO project) have included lots of information about the real-life vehicles that inspired the sets. The Hayabusa booklet is bilingual (English & Japanese), and available in several additional languages from the LEGO CUUSOO page.

As I learned from the LEGO Hayabusa booklet, the real Hayabusa was a Japanese sample-return spacecraft launched in 2003 that rendezvoused with the asteroid Itokawa in 2005. Five years later, Hayabusa returned to Earth carrying particles from the asteroid. The spacecraft sported ion engines — you know, like TIE fighters! The mission’s project manager was Junichiro Kawaguchi, who made it into the set as a minifig.

One of the things that’s so interesting about the LEGO CUUSOO process is seeing the differences between the original LEGO fan’s design and the final design as a LEGO set. According to the press release earlier this year:

The original Hayabusa model on LEGO CUUSOO was built by Daisuke Okubo and achieved 1,000 supporters on the Japanese-only version of LEGO CUUSOO in the spring of 2011. LEGO model designer Melody Louise Caddick designed the final model, refining earlier concept models based on Daisuke’s original project.

The final model does look very different from Daisuke’s original design (above). I have to admit that I do appreciate the details and overall shaping introduced during the official redesign, proving that a collaboration between a regular builder and a professional designer can yield great results.

The build itself is fun though fairly basic, but what innovative techniques can you really expect from source material that’s basically a box with wings? My greatest disappointment is that the spacecraft’s body is built from yellow bricks rather than gold — the only (pearl) gold piece is the radar dish that serves as the reentry vehicle on the front. Then again, I suspect that chrome and pearl gold might be expensive colors to produce, given their overall rarity.

I recommend this set as a display model for collectors; this isn’t a set that you buy for the parts (I certainly don’t intend to take it apart and sort the pieces into my collection). Nevertheless, I think 21101 Hayabusa

is a must-have for any fan of realistic LEGO spacecraft. The set goes for USD 49 from the LEGO Shop, and includes 369 pieces.