This past Sunday concluded this year’s Chicago Brickworld, and I’ve finally recovered and rested up a bit from the trip (and subsequent cold). This was only my second Lego convention, and I think it’s safe to say I’m hooked. The convention space at the Westin hotel was enormous. I’m sure many of you will have already seen the video walk-through that Nannan and I did of the three display rooms, which runs over 45 minutes and still isn’t comprehensive. Evidently they’re looking at moving to an even larger space next year that can accommodate all of the displays in a single room, which would be quite something. Unlike Brickcon, the other convention I’ve attended, the majority of the displays are arranged by builder, and not theme. I think there’s a lot of merit to both ways–while it’s awesome seeing huge tables full of sci-fi MOCs, it’s also quite fun to see all the different sorts of things a single person builds. 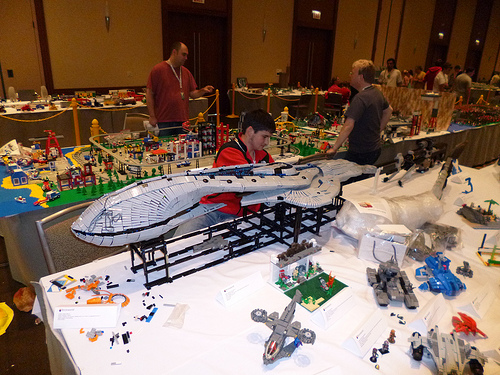 It was great fun getting to meet the people behind the avatars of so many great builders, such as fellow TBB’er Nannan and his counterpart in perpetrating unusually large dioramas Tyler Clites, LDM, and Si-MOCs, among many, many others. One of the highlights for me was a Saturday night unscheduled M-Tron building competition (generously organized and judged by a great guy whose name escapes me currently). After looking at so many terrific MOCs for three days straight, I was itching to build, and with 90 minutes and a large and hilariously haphazard collection of pieces, about a dozen of us sat down and pounded some mean MOCs out. 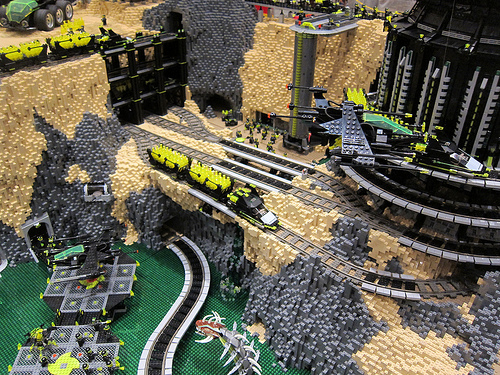 There were too many fantastic MOCs (including the one featured in the previous post) to possibly highlight them all, so I’ll just conclude by saying that you should definitely check out the Brickworld flickr pool, and even better, attend next year and meet lots of other great LEGO fans and see the stuff in person.