Hi there. I’m Caylin, and I am an AFFOL—a female adult fan of LEGO. And I might just have a new infatuation with the LEGO Friends

As a kid, I grew up with the typical “girl” toys like Barbie. Oh, I had plenty of Barbies—and my favorite was the ballerina. I had a Joey doll, too, from NKOTB. I played with Kenner’s original Littlest Pet Shop, I had My Little Ponies. And I had LEGO. Now, granted, I taught myself to tie a noose with my Barbies and my Littlest Pet Shop iguana went head to head against the Jurassic Park velociraptors. So my play habits might not have been fully in line with maybe the norm.

But oh, the Friends line. My inner child is laughing with sheer glee. 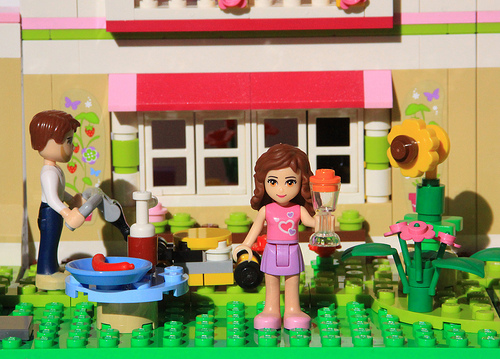 I really quite enjoyed the build. I’m impressed on a number of levels with the model itself. It’s not parts intensive, of course, like the Café Corner and comparable sets. But thankfully it’s NOT Belville. The walls are some of the larger pieces, but I think that’s okay. I wouldn’t be buying this line for the bricks, anyway.

The accessory builds are pretty nifty, too. I love the blender design, and the barbeque gets the point across without getting too overly bulky. The shower door is simply but effective. 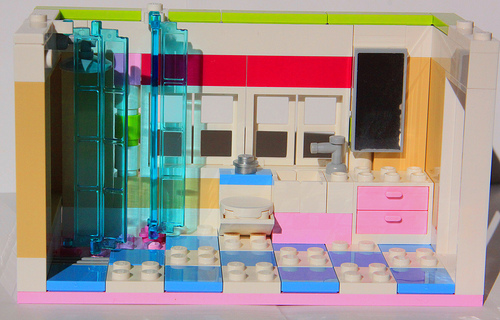 What I liked most about this particular set is that it’s modular. Each room is a completely separate build. And they’re quite detailed, too. I do, however, want a word with whoever is the interior designer of this house because purple furniture is terrible, and the resale value has to be in the hole with that lime-green kitchen. But again, my inner child is squealing with glee over the fun colors. So I’m torn. 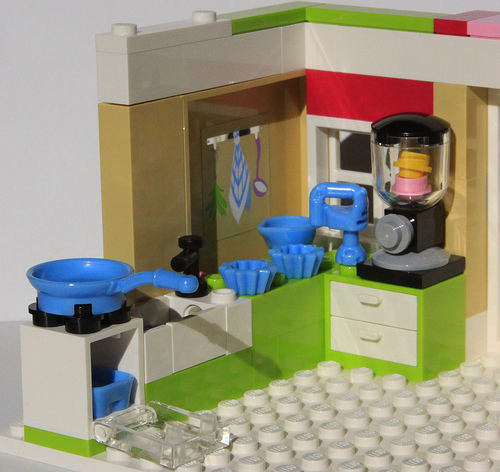 The adult me, however, is asking who sleeps where because there’s only one double-occupancy bed for a family of three. I can’t say I understand why you’d sunbath on the roof, but that I think is a question for the architect of the house.

This house is completely designed for interaction and customization, and certainly not with the silly levers and numerous catapults from some of the other lines. There’s nothing to pull to make a mini-figure drop, and nothing to fling. And it’s totally fine. I don’t miss any of that. I’d describe it best as a “build your own dollhouse” with the LEGO edge to it. It is definitely ALL LEGO, though. I think the best description I’ve seen is that the Friends line is most definitely a “gateway” line. Some of the other lines are definitely marketed towards boys, which is fine. But this line is for their sisters, which is ultimately bad news for the brothers, since now there’s competition for available brick during playtime. 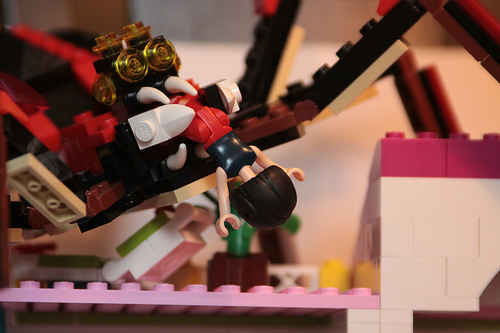 Now, I get that this line has caused something of an uproar with certain groups. I’m going to tell you that I do not feel marginalized or stereotyped at all by this line. I am offended that the color choice for the bed is blue and yellow, which are not complementary colors and one is a warm color and the other is a cool color — NOT the fact that there’s pink and purple and lime green and whatever other color the set designers put in the sets. It’s a complete non-issue for me that the mini-dolls made more of an attempt at a general human design rather than a flat block. The vibrant colors are for accent, but the bulk of the build is white and tan. I’m 26 years old and I sat down and played with the set after I built it. And once I was done, I made alterations to it. Because it’s LEGO and that’s what you’re supposed to do. 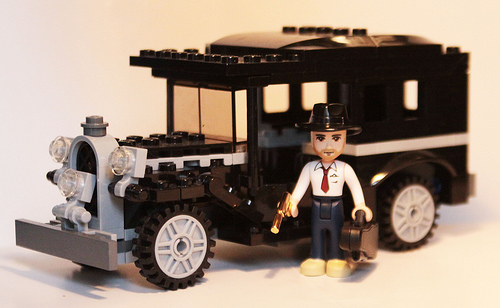