from its shelves, citing the book’s “mature content.” Walmart and Sam’s Club have a long history of corporate censorship (yes, that link is from 1997!), but it’s sad to see them throw their weight around against one of our own.

CNET News has the details, and Bruce over at GodBricks has an excellent opinion piece that approaches the issue from a religious perspective.

Brendan’s publisher Skyhorse sent The Brothers Brick a copy of The Brick Bible a while ago, and I finally found the time to sit down with it over Thanksgiving. The book is a large-format paperback, like a graphic novel. Some of the photos are a bit dark and/or grainy, but given that they span ten years of digital photography, I suspect the lower-quality ones are the earliest (the ones I know are his most recent all show off Brendan’s stellar presentation skills).

In terms of subject matter, The Brick Bible is no more a children’s book than the Bible. In that sense, Sam’s Club isn’t wrong — yes, indeed, the Bible is rampant with “mature content.” And Brendan’s version doesn’t shirk from the difficult stories compiled by the Deuteronomist in books like Judges that rarely make the sanitized Sunday School curriculum. Yes, Brendan’s LEGO version of the Levite and his concubine (Judges 20) is tough to read, but so is the original. Don’t like the way Brandon shows God repeatedly making the Israelites stone their neighbors who’ve committed minor sins (a la the Taliban)? Too bad, it’s in the Bible. Think it’s a bit odd that God and Satan use Job as a plaything in their cosmic game? Read the book. 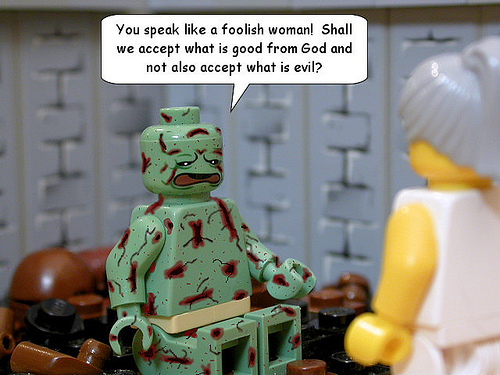 Oddly, though, The Brick Bible is just as thought-provoking and works just as well regardless of your religious or philosophical persuasion (as Bruce says). For the non-religious, the book confirms why some of us have set aside the belief system illustrated so well in Brendan’s book. For believers, The Brick Bible is an accurate (if incomplete) representation of the Old Testament. If your belief doesn’t come through stronger after seeing exactly what’s in the source material, don’t blame Brendan Powell Smith. But for all of you out there reading this (presumably LEGO fans) who might not see yourself so clearly on one side or the other of the religious divide, it’s a great collection of LEGO art with interesting building techniques and (generally) excellent LEGO photography.

My recommendation? Buy it. I’ll give you three reasons: First, because it’s a rip-roaring read that has all the crazy shenanigans in the ancient original. Second, to show support for a fellow member of the LEGO building community. Third, because buying this banned book makes a statement about corporate censorship in the face of the likes of Sam’s Club/Walmart. Sure, most of us live in countries where our governments don’t have the right to censor the art and literature we choose to consume, but corporations do have ever-increasing power over what we can and can’t read, watch, or listen to. I’d love to hear about a campaign to have the Bible banned from Sam’s Club on exactly the same grounds they used to ban Brendon’s illustrated LEGO Bible. Think of the children! Anyway, buy the book. Don’t let Sam’s Club/Walmart win.