After I posted my little fleet of microscale spaceships in September, I kept tinkering with the design of the ships, and when I got bored, built new ones. By BrickCon, I had added a new cruiser and hospital ship. 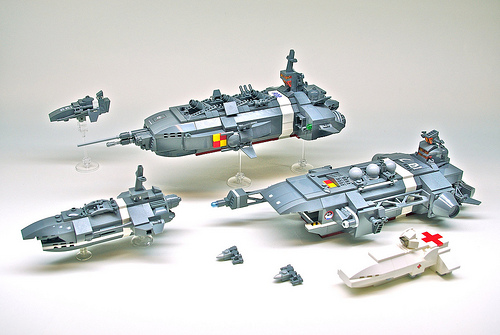 The cruiser is based on the same keel as the carrier, but the most notable improvements overall are the little bits of light gray, red, and yellow, plus the decals. Exo-Force sets provide a remarkable diversity of military/industrial designs on clear sticker sheets that add cool details to a finished model.

Since I had all that gray greebly LEGO lying around, I tried building a Silverback from Gears of War 3,

but it got considerably bigger than I intended — though I like the ultimate design — so I’m calling this little battlemech “Sasquatch”: 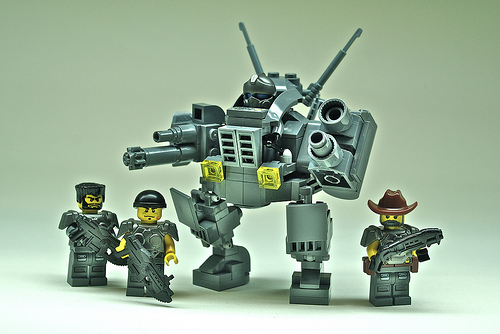 For the minifigs, I’m trying out the new Gears-inspired armor and weapons from BrickWarriors. Their lineup doesn’t currently include a non-retro Lancer rifle or Gnasher shotgun, so I’m using the old Amazing Armory versions.

(I’m also experimenting with a new indoor photo setup and post-processing, which explains the difference in the same light bluish gray between the two photos.)

2 comments on “Between home and the war’s desolation”