As the recent discussion on our post about the new Series 5 Collectible Minifigures proves, it’s pretty hard to identify the minifigs using any but the “touch and feel” method. Thankfully, SEALUG / TexLUG member Jason Junker has put together this handy guide to find the minifigs you want by touch.

Small Clown: His bowler hat feels similar to the Detective’s hat. He also has a pie, which feels smaller than I thought it would. (that’s what she said) [Tee hee! -ed] Each time I confirmed by feeling for the short legs.

Boxer: The surprise here is that his boxing gloves are attached to his hands. He’s one of the hardest to feel if you don’t know this little fact. Also feel for the gap in his face guard. (Thanks for the “attached gloves tip” W. Heron)

Royal Guard: 2 words, HUGE hat. And feel for the rifle to confirm.

Lumberjack: The only “baseball cap” in this series. The axe is easily recognizable. But be sure that you feel the attached axe head on the end, or it could be the Evil Dwarf’s axe handle.

Zookeeper: I expected the monkey to be easy to feel, but the banana is the dead give away here. No other pieces feel anything like it.

Graduate: He’s the only fig with a 2×2 tile (certificate, like “Disco Guy’s” record from S2), and his graduation cap is what I used to confirm. It’s square, with 1 different feeling corner for the tassel and a little raised bump in the middle of the top.

Cave Woman: The only fig with a squishy element this time. Her hair. Feel for the bone separately, and the club is the same as the S1 Cave Man’s. (Thanks for the “squishy hair tip” W. Heron)

Snowboarder Guy: Just like the last 2 snowboarders, the snowboard is a dead giveaway.

Detective: His hat is double billed, so feel for both sides, or it could be the Small Clown. I felt for the magnifying glass to confirm.

Ice Fisherman: The fish, and fishing pole are the giveaway here, just like the last 2 series fisherman/gnome.

Evil Dwarf: The winged helmet is bulky, but so are the pieces for the Royal Guard & Gladiator, so I felt around for 1 of the 2 detached axe blades, or the handle. The difference in the shield between the Gladiator’s is that the front of the Evil Dwarf’s is smooth.

Gladiator: He has a huge bulky helmet, but he’s also the only fig with a knife/sword. It’s shorter than I expected. (That’s what… never mind) The difference in the shield between the Evil Dwarf’s is that the front of the Gladiator’s has a stud.

Gangster: This fig has the smallest accessory, his pistol. I also felt his hat, it’s he same as the Cowboy’s from S1 or Indiana Jones’. I never once knowingly felt his case.

Fitness Instructor: Big long hair, and the “boom box” feels like a brick with a handle (just like the Rapper’s from S3)

Lizard Guy: Last but not least, the one I was most excited about, and will be the first one I open… His tail was what I ended up feeling for. It’s a very large piece that fits under his head like a backpack, so you can feel for that tab with the hole in it as well.

Jason rightly says that it’s helpful to have a good picture in front of you, so here it is: 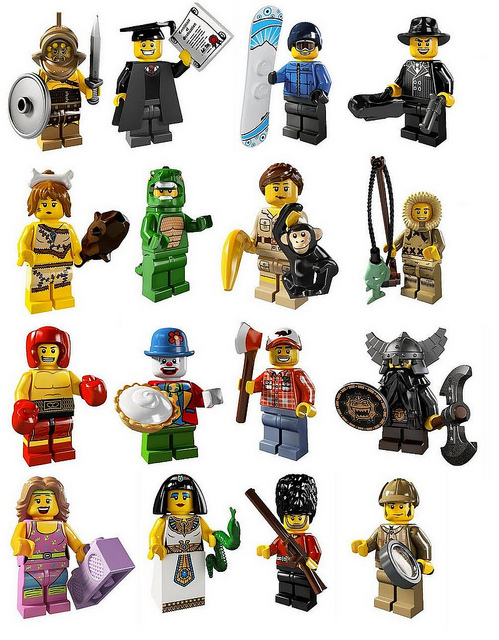