As readers will have noticed in our LEGO News feed last week, custom minifig accessory vendor BrickForge has just released a new batch of items, including a new “Shock Trooper” armor. We ordered a couple batches, and I managed to find enough sunshine in the Seattle “summer” to take a few pictures. 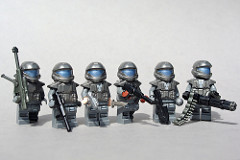 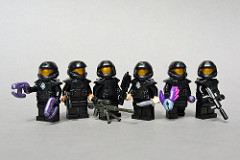 The armor comes in a sort of steel color that’s rather lovely, along with black that has a similar metallic sheen. Neither color really matches typical colors available for minifig legs and torsos, but they combine reasonably well with neutral colors like bley and black. BrickForge also offers two printed variants, with an eagle on the gray and a flaming skull on the black. I’ll be interested to see how other customizers use these helmets and armor, but I focused on their inevitable use as ODSTs from Halo. Armor for a squad of six will run you a bit over $20.

One of the few areas in which BrickForge and BrickArms overlap is in items inspired (a safe assumption, I think) by the Halo universe, so minifig customizers have a bit more choice in this area. I like to mix and match custom parts from everybody, and I have to admit that I personally prefer the BrickArms versions of these sci-fi weapons (including the previously reviewed BrickArms minigun). I think the combination of the BrickForge armor and BrickArms weapons is undeniably awesome — “better together,” as I always say.

I cracked myself up by putting one of the troopers on a BrickForge scooter, which my wife dubbed the UNSC “Shrew”. I was amused enough that I would like to share this little masterpiece with the world. You’re welcome. 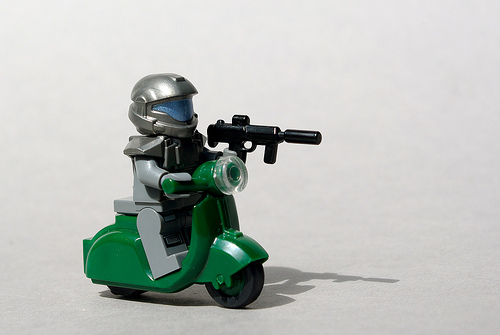 As fun as a couple squads of Orbital Drop Shock Troopers might be, I had the most fun putting together the Avengers — inspired by the blue helmet with an A and the big American shield that begged themselves to be equipped on a classic Captain America. Wolverine (with BrickForge “Savage Mask”) and Thor (BrickForge hammer) quickly followed, supplemented by a HAZEL-helmeted Iron Man, official Spider-Man, and my old Hulk. 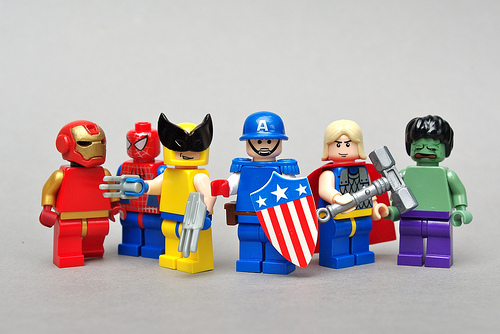 The ODSTs and Avengers were distracting enough that I didn’t get a chance to do much with the test tubes, bottles, martini glasses, and other new glassware BrickForge has just released. Briefly, they complement official LEGO items nicely, and I’m highly entertained by the idea of minifigs squaring off against each other in tiny bar fights with broken bottles.