Comic-Con was crowded. The biggest pop culture celebration in the world happened in San Diego from July 20 to 24. Over 125,000 crashed my Downtown where I work and eat. Infernal interlopers. Seriously, it was great hectic fun as always. It’s nice to live in the city where there’s an annual shopping, people watching and pop culture extravaganza of epic proportions.

I wasn’t lucky enough to get 4 day passes with preview night or scoop everyone on the biggest LEGO related news from Comic-Con, but others in the LEGO and Comics fan worlds were on it, and we were able to pass it on to you last week: LEGO negotiated DC and Marvel Comics licenses. DC sets are scheduled for set releases in January 2012 and Marvel in summer of 2012. 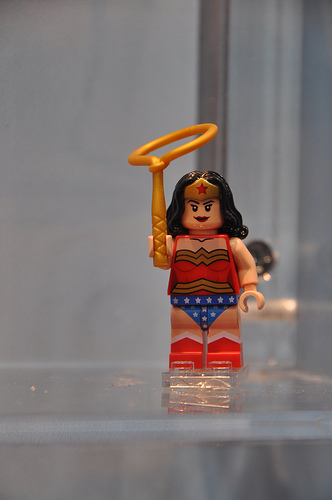 There was also a display with four Hero Factory tie in figures: Green Lantern, Batman (no, I don’t know what’s attached to his back), Iron Man and The Hulk.

Both the minifigs and Hero Factory characters are official, but keep in mind they’re prototypes so they’re likely to be a bit rough and have changes before final release.

Unfortunately, the only LEGO panel this year was a Star Wars panel on Friday morning, which I missed. D’oh!

The other great highlight is running into all kinds of people. People in costumes, friends and even friends in costume. The only LEGO related costume I saw this year was a sexy red number sported by Michael “Bruno” Todd, an excellent human being, cat rescuer and force of nature. He dressed up just like an extremely rare vintage LEGO promotional figure that he somehow managed to snag late last year. Really, he looks just like the doll. 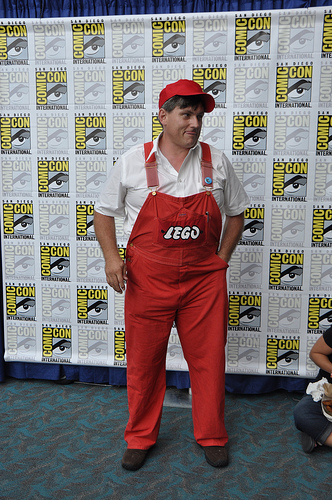 I was also amused by a woman dressed as Poison Ivy standing right next minfig Poison Ivy. My wife also dragged me over the LEGO free build area to see a strong contender for my personal Cutest Hobbit Child Dressed as Yoda Prize. Very prestigious.

Another great highlight of at Comic-Con is all the inspiration for LEGO building. Several weeks ago I searched all over the internet to find good concept art for the Numereji 2421 display at BrickCon and found some good stuff, but nobody quite had what I was looking for. It was a pleasant surprise to run across Robh Ruppel’s book, Aspect Ratio, and the great concept art sketches on his website. Not too militarized, not too idealized. Hit my personal sweet spot.