Our hope for the Numereji 2421 display at BrickCon 2011 is that the contributors will be free to create their vision of what kind of community would develop from a group of crash survivors isolated for a generation, and how their reconnection with other space travelers would play out. 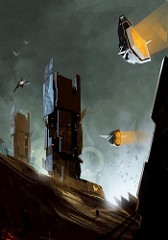 This is 400 years in the future, so we’d love to see where both imagination and practicality go:

You name it, go to town with it. There’s definitely a place for elements of sci-fi, ecopunk, space, cyberpunk and frontier themes.

That being said, it does help to provide a little bit of a framework so people can know how to contribute to the overall collaboration, so we’re laying out a few guidelines, many of which are the result of discussions among TBB contributors and in the Flickr planning group.

Anchor piece: Brandon Bannerman’s crashed ship, The Howland, will be 96×96 studs and fairly tall. Check out his great accompanying backstory.

Scale and life forms: Minifig scale, with yellow headed minifigs as the main survivor group, though non-human and brick built species (sentient or not, mega or not) are welcome to join in the fun. Animals and plants from Earth, native species, and centuries of genetic modification would be pretty cool. 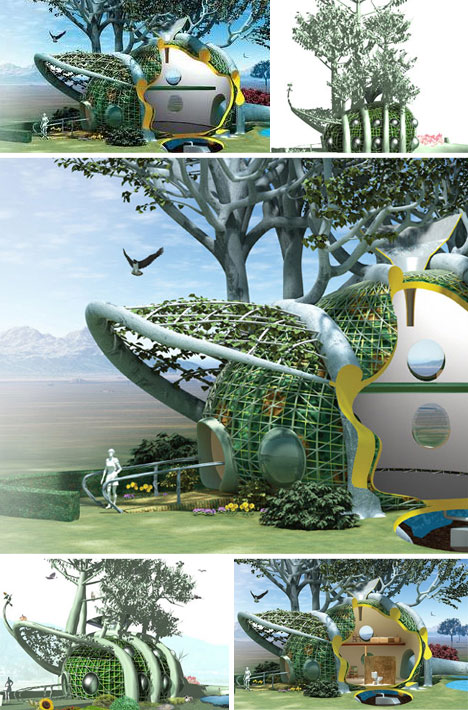 New Howland: The community of New Howland had a rough few years of scavenging at the beginning, but figured out a way to sustain itself for the long haul because the survivors didn’t have hope of moving on to a new planet. They developed some civil institutions, commerce and law enforcement.

The newer arrivals could include elements of an interplanetary government and even private corporate security, but we’re not going for a space ware here though the layout is likely to reflect the contrast between the tightly knit sustainable survivor community and all the new people and interests pouring into the place.

It’s the very mix of all these styles that will make the display interesting!

Vehicle/building color palette: The main survivor group would have scavenged from the crashed ship, which will be have mainly white hull sections and gray/bley machinery. They would have eventually started to build other sorts of structures as time passed.

The Green Wall from Stephanie Brothers on Vimeo.

The later arrivals will bring either a bit more rag tag aesthetic or might even have a corporate look.

Landscape color palette: The main planet surface will be tan with a Mediterranean or moderately arid climate. Modules that include water features, stone outcroppings, hills, mountains or forests will be fine just as long as the builder figures out some way to transition back to the rest of the display at the edges of their sections.

Modules: For the main part of the display we’ll be using a base plate plus one brick standard (BP+1B) in 32×32 stud sections. The little bit of height will hopefully allow for people to work in little depressions, gullies, plowed fields or hillocks. Simple tan base plates for countryside and farmland or gray base plates for the newly established spaceport part of town will be workable. Smaller or larger modules in multiples of 16 studs (e.g.: street, aqueduct, landing pad) will be okay and even helpful in breaking up the 32×32 grid pattern.

Display size: Width we won’t know until much later, but depth will be about six or seven 32×32 modules, just in case someone is thinking about building a stream or mountain range across the display. We’d even be open to cliff dwellings, underwater stuff or hill and building cutaways that go to (or even over) the edge of the tables.

Build a Community, play well, and ask yourself how you would sustain a community in a new land.

If you have any questions or ideas please participate in our Flickr planning group or leave comments right here.