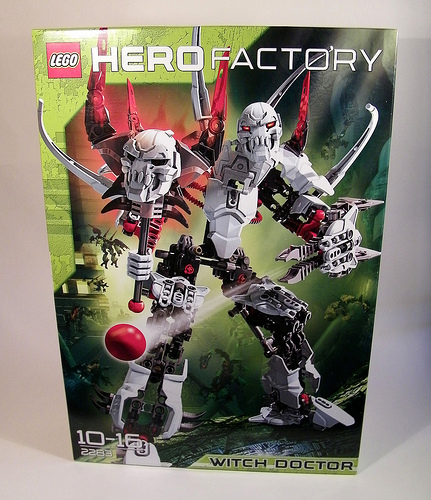 I was sent some of the upcoming Hero Factory sets to review, so I built them with my two sons, 4 and 8 years old, in order to get the reaction of someone in the age demographic for these sets. I have to say that I was pleasantly surprised. But first, just the facts. 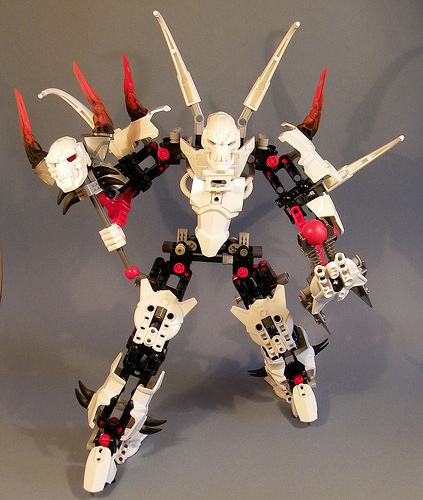 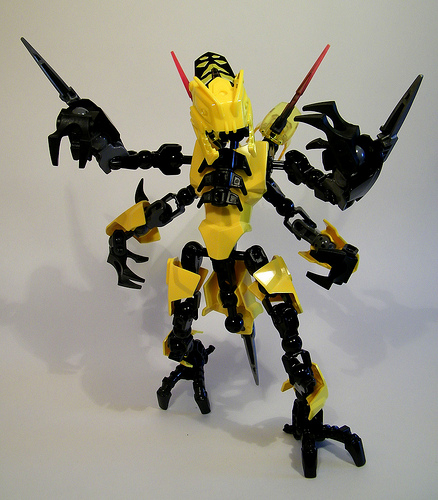 My four year old built Furno and my eight year old built Stringer and Waspix. Both of my sons are experienced Bioinicle and Hero Factory builders and neither had any problems building the sets, though the four year old had a few issues with the instructions. I built Witch Doctor as it was too complex for the boys.

Now for the reactions, opinions and general blather.

The first thing that jumped out at me was the theme. It appears that this series of Hero Factory is going with an animal totem theme. Furno has a hawk mask and Stringer is a bear. According the pictures on the back of the box, other Heroes may have a rhino totem, a wolf or fox and a tiger. Bad guy Waspix is naturally a wasp. Witch Doctor appears to be just that, as it has a skull theme to it and has a stylized skull scepter/wand.

The second thing I noticed was that there quite a few new parts that don’t use “bionicle-style” connections, but more traditional connection points, such as clips. The claws on Stringer really stood out in this regard. 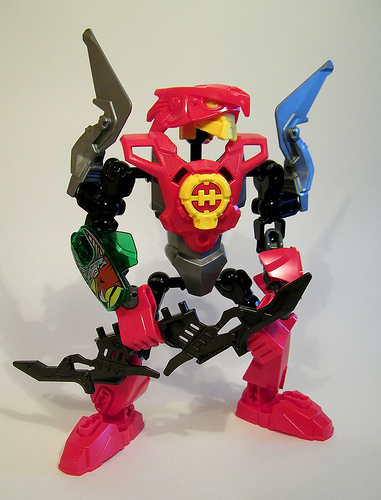 Lastly, as far as I reactions go, I was quite impressed with the Witch Doctor build. It was actually quite complex, very rugged and surprisingly large. I wouldn’t be surprised if the skull masks find their way into quite a few fan creations, as they are rather cool. My only complaint is that his left hand has the over-used bionicle shooter, but kids like things that fire. I just wish it had something new there. Waspix was an average build, with a decent amount of pieces. The Heroes had very few pieces and took me about a minute to put together. Even my four year old had one together in less than five minutes and they have an age range of 6-16. They are pretty simplistic.

My sons reactions were very similar but they each noticed different things. My four year old was enamored with the animal theme. He especially liked the Bear/Stringer. He wasn’t as excited about the wasp, but he “flew” the Hawk all over the house and “fought” with the Bear quite a bit. He was impressed with Witch Doctor, due to his size but didn’t really like the skulls as much. 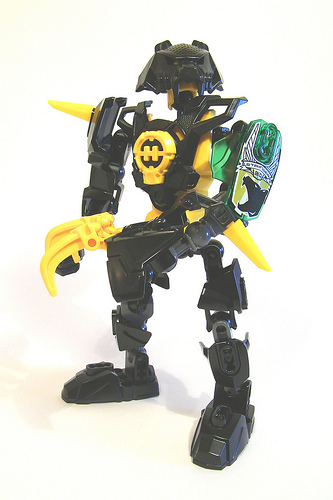 My 8 year old was in heaven. Part of his reaction was colored by the fact that he was building sets that weren’t available yet, but he did come back down to earth to answer a few questions. He loved Waspix, due to the multiple arms, red spikes and trans-yellow wings. Of the two Heroes, Stringer the Bear was his favorite, due to the claws. He said the actual building experience was better than the previous Hero Factory offerings, but he still preferred Bionicle and misses it. He thought Witch Doctor was really cool because he is really into skeletons right now. He liked the animal theme of the two Heroes but felt like they were too simple to build and didn’t have enough pieces.

All of the review pictures can found in the Hero Factory set in my photostream.

This concludes our Father/Son review. Hopefully it gives you some helpful facts about the new Hero Factory sets. Take care!

Edit: I am not an experienced reviewer. If there is information that I left out, please ask questions in the comments and I will do my best to answer them.