As we head into the summer building and convention season, we’re pleased to bring you a genuine, original science-fiction short story and concept art to serve as inspiration for Numereji 2421, written and illustrated by Brandon “Catsy” Bannerman.

We’re keeping “building standards” pretty loose right now, with the exception of tan as the primary background color for the landscape and white for salvaged ship sections. Follow the discussion in the dedicated group on Flickr. In the meantime, happy reading!

“See the stars,” said the recruitment holos, brimming with high-saturation images of well-fed colonists farming an expansive homestead under a sky with multiple moons. “Find a new life in the Stellar Diaspora.” To the inhabitants of Old Earth, it was a compelling argument — Sol 3 was, in the parlance of the time, a “dump”. Two centuries of industrial civilization and a population of billions staggering inexorably towards a Malthusian terminal scenario had turned the planet into a concrete and steel wasteland of cityscapes — a place where a gallon of clean water cost more than a day in a simsense VR pod, solitary living quarters were an expensive luxury, and blue sky was a thing of old twenty-first century threedys. Day-to-day life on Earth was defined by escaping from it as much as possible — and space was the ultimate escape. 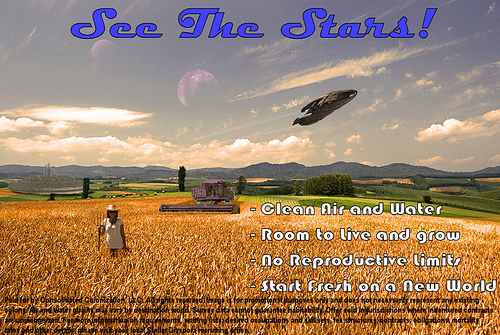 Thus began the Stellar Diaspora: mankind’s search for a new home worthy of the name. It began with the generation ships, colossal megastructures the size of a spacescraper intended to support hundreds of families at sublight speeds on the long journey to the nearest extrasolar planets with hydrogen in their spectral lines. But with the invention of the Cheyden faster-than-light drive, the number of worlds with the potential for colonization went from less than ten to more than a hundred virtually overnight.

Whole arcologies — in some cases, entire cities — were shipped into orbit piece by piece on the equatorial elevators. If it could be hermetically sealed and hardened against radiation, you could slap a Cheyden drive on it and turn it into a colony ship, especially once the applications of Cheyden’s principles towards artificial gravity were discovered.

Some corporations even turned the Diaspora into a business model, rebuilding abandoned cities as modular units and repopulating them with citizens who agreed to live and work there until the city filled up enough to populate a new offworld shipment — jokingly called a “Colony in a Box”. There are stories of some insular neighborhoods not realizing that their wave had shipped until they were already in space.

They say that insanity is doing the same thing twice and expecting different results. By this measure our ancestors were certifiable.

The problem was that in the subsequent centuries of colonization, no one — to our knowledge, anyway — ever found a planet as rich in resources, teeming with life, or forgiving of abuse as Earth. On planet after planet, humanity took root in alien soil and proceeded to strip and poison their new homes in a matter of decades. The Cheyden FTL drive may have saved mankind from spiraling into extinction on our ancestral home, but it also made it much easier to say, “the next planet will be different.” Why struggle for years to eke out a miserable existence on a rock that became more barren with each breath, when your telescopes showed another potentially habitable world only a handful of light-years away, and an interstellar starship waited in orbit for you to pack everything up and move on?

We brought animals and insects, of course. Dogs, cats, cattle, sheep, honey bees — thousands upon thousands of species, millions of embryos in cryostasis. Everything we’d need to create a new Earth, assuming we could ever find one.

But we didn’t bring locusts — instead, we had become them.

Numereji was not our destination, but it was to become our home. The CSS Howland — not its original name, but that scarcely mattered after 250 years — departed 23 Librae with the intention of making the relatively short trek of 8LY to our next potential home. Three point six years transit time, with an astrogator and skeleton crew awakened once per year to do a systems check and confirm our position. We’d done it a dozen times.

This would be our last.

In 2396, Pilot Second Class Robert Klestrom — along with every other living person on the Howland — awakened to the sound of alarms and the smell of burning silicon. At some point during his last cold shift, something had thrown the Howland far off-course and damaged its automated systems. A brush with a drifting black hole, a shock front from a supernova — we may never know. The end result was that the next scheduled shift had never been awakened, and the Howland had continued on FTL for more than a decade until its damaged navcomp managed to fully repair itself.

We might have slept our way to the other side of the galaxy if the navcomp hadn’t locked on to the Numereji system — the nearest star with a potentially habitable world — and altered the ship’s course under the assumption that this was its destination. There was just one problem: the navcomp no longer had the security access to awaken crew from cold sleep except in an emergency.

Which was how Pilot Klestrom found himself desperately — and futilely — fighting to keep the Howland from plunging into the atmosphere of Numereji 4.

A few words about the Howland are necessary here. Picture, if you will, a twenty-first century spacescraper. A kilometer and a half of white polyceramics and monomolecular aluminum, fat at one end and narrowing to a needle-like spindle. Attach a sublight reaction drive at the fat end, and surround it with the distinctive bristling toroids of a Cheyden drive; massive rings that look like a donut that had an unfortunate encounter with a porcupine. Add shuttle bays, cargo pods, transteel windows too numerous to count, and all the other accouterments of a colonial starship. No lift surfaces to speak of; it was never intended to fly in an atmosphere. It is aerodynamic in much the same way that a mountain is not.

Now drop it from orbit.

There are ways that a skilled pilot can control the unintended re-entry of a non-atmospheric vessel of sufficient size. It ultimately comes down to this: how and where can you create drag? Open exterior airlock doors and access panels. Extend docking arms and clamps. Fire the right maneuvering thrusters in order to tip the “nose” towards the sky, and use bursts from the sublight drive to slow your descent.

Klestrom did all of these things and more. Some of the atmospheric shuttlecraft managed to launch safely; some did not. Many crew made it to the escape pods, and the holes they left created yet more drag.

When the Howland struck the ground, it did so very nearly laterally–like a stone skipping across a pond. It left pieces of itself scattered for hundreds of kilometers along a furrow in the ground that in places are now called Klestrom Canyon. Some of those pieces were large enough — and intact enough — to harbor survivors. 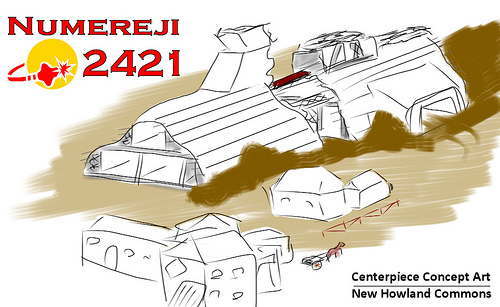 Robert Klestrom did not survive the last flight of the Howland. We know all of these things from the bridge security holos, and because we are alive to write about them. But this is how we found ourselves on this harsh but habitable world, the fourth planet of the Numereji system — fifty light years from any known human colony world, with no FTL-capable shuttles and only the shattered remains of a starship.

What was there to do but begin picking up the pieces?

— Excerpt from the memoirs of Jazmine Stainton, shuttle flight officer, 2347-2419

1 comment on “Fire or Renewal: A History of the CSS Howland Survivors on Numereji”