Many years ago, Mark Neumann introduced a mecha challenge to the unsuspecting LEGO world on LUGNET. Its name was Iron Mecha. Its premise was simple: build a mecha based on a design Mark posted. The winner was an uninspiring chap called Mark Stafford who never went on to much. He did have a pretty cool mecha though.

Five and a half years later, Soren Roberts and Mark have joined forces to bring a new version of Iron Mecha in the MechaHub group on flickr. There’s no prizes and no promise of rankings but it’s a little bit of history I plan to particpate in.

And there is great honour in being crowned ‘Iron Mecha Chef’. 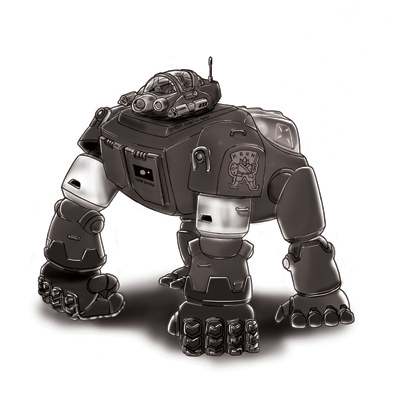 As Mark described the original:

I shall pick a graphic of a mecha. The builder will build a mecha based off of that graphic. Artistic license is encouraged. You may build macro, micro or anything in between. The Build does not need to be an exact copy of the graphic but we should be able to see how you got from the inspirational image to your build.