The annual Hong Kong Lego convention called Brick Adventure took place in late January of this year, and you’re probably wondering why we’re making an event wrap-up post almost two months later. Despite the late timing, we don’t want you to miss out on seeing many of the unique Asia-themed and high-quality models worth mentioning late than never. The article below was written by Matt Hocker (Brickadier General), who nicely summarizes the exhibit while pointing out some of the highlights of the show. You can see more pictures on Flickr. 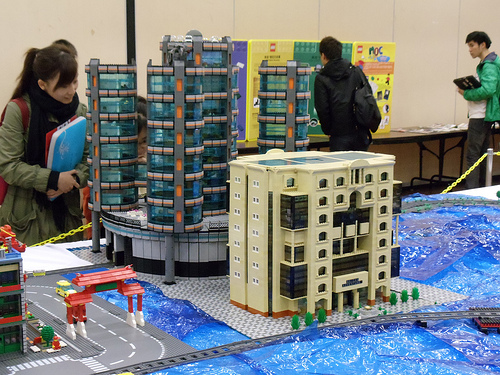 For the past six months, I’ve been living and working in Mainland, China. With my Lego collection still in America, I’ve been going through ABS withdrawal. Thankfully, Hong Kong has a relatively large AFOL base and, as fate would have it, one of their exhibitions (Bricks Adventure 2011) coincided with my vacation. Having never been to an international event before, I didn’t know what to expect. What I found was that the Hong Kong Lego fans were very welcoming and organized a wonderful show, filled with wonderful creations. While there, I definitely got my Lego fix and then some. 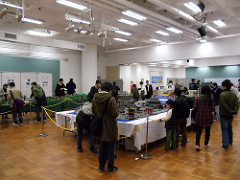 With this being its second year running, Bricks Adventure is an annual Lego exhibition run by the AFOL group, Legend Bricks. Unlike American events, which are usually four day affairs, Bricks Adventure was held over a whopping ten day period (down from a 17 day period last year), and the show was open to the public every day. In 2010, the exhibition drew in 13,000 visitors, while 11,500 showed up this year. Considering that the event was seven days shorter, this year’s attendance was actually stronger than 2010’s.

With thirty-five participants, Bricks Adventure was run on a relatively smaller scale than many events in Western countries. However, don’t let the seemingly small numbers fool you. Truth be told, this dedicated group of AFOLs churned out a slew of awe-inspiring MOCS and, clearly, the emphasis was on quality over quantity. 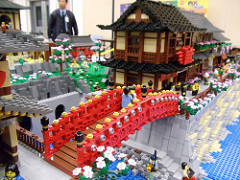 A wide variety of themes were represented, which kept things fresh and held one’s interest. A personal favorite of mine was the collaborative Japanese train layout by Andy Bear, William Wong, Alynn, and Schneider Cheung. They did a fantastic job of making a cohesive display, filled with tons of detail. There was also another wonderful collaborative train layout, featuring European inspired buildings. One particularly interesting building was the Paradisa hotel, which made excellent use of curves. 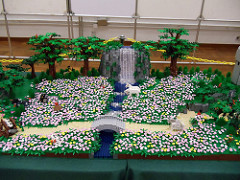 Other fantastic collaborative displays consisted of the themes of World War II, castle, and pirates. The techniques employed in crafting the hull and masts of Arzlan’s Chinese junk made it a MOC worth drooling over. The castle display was also fun to look at, especially with its splashes of humor here and there, such as the girl tossing a pig to a swarm of hungry gators in the castle moat.

Mechs were well represented. For example, Icedpluscoffee had impressive renderings of the “twins” from Transformers, as well as an APU from The Matrix Reloaded. Although he wasn’t present at the exhibition, one builder from Taiwan (Tsan-Nien) still shipped two of his mechs over to Hong Kong for display. Now that’s dedication! 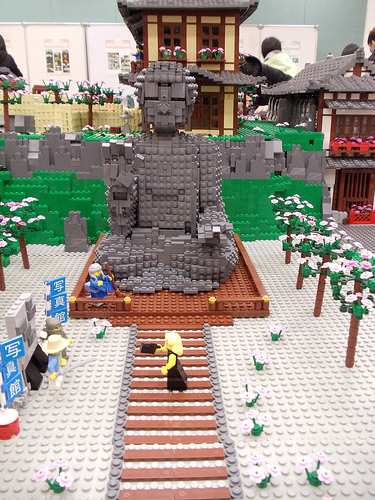 A word also needs to be said about Schneider Cheung, who can crank out awesome studs-out sculptures in what seems like no time. For me, his most memorable pieces were a Chinese New Year lion head and seated Buddha, which was placed within the Japanese display. He also had some MOCs that looked good enough to eat…literally!

Overall, being able to attend Bricks Adventure was a more than memorable experience. For many Hong Kong AFOLs, this was the first time they were able to see their displays set up, and it was an honor for me to share in their enthusiasm. Without a doubt, Hong Kong’s Lego fans are as lively as the city itself, making an event like Bricks Adventure well worth visiting.