For interview number 11, Keith Goldman heads back to Australia for the second time. Take it away, Keith! 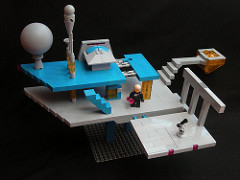 My next guest is an Australian builder who loves long walks on the beach, kittens, and seafood. Although he would never admit it, Shannon “Ocean” Sproule has quietly become a household name in the hobby through his ‘less is more’ style and often comedic models, and enjoys a big following on both MOCpages and Flickr. Shannon also created the ‘Cyborg Racers’ fad that swept MOCpages and abroad.

I sat down with Shannon Sproule in my hometown of Las Vegas, Nevada, backstage at the Excalibur Hotel showcase where he was performing with a dozen of his countrymen in the Thunder from Down Under all-male revue. We talked about how Vegas consumes 60,000 pounds of shrimp a day, studded thongs, and the horrible truth of what really happened to Paul Hogan. We also talked about LEGO.

Keith Goldman: Describe your strengths and weaknesses as a builder. What have you gotten better at over the years, and what remains a challenge?

Shannon Sproule: It might sound funny but I don’t consider myself to be a very good builder; I think ideas are my strength and I force them into mocs through lazy building or sheer stubbornness! Patience, or lack thereof, is definitely a weakness of mine. I can rarely be bothered finishing a model properly; it’s enough that I achieve the essence of an idea in a build and the viewer can fill in the details themselves. I’m like a LEGO impressionist, or so I like to think! Random studs here and there, no-matter, it’s the spirit of the creation I focus on. Minute changes to details can alter the appearance of the whole model which can be a slippery slope.

KG: When is a creation ever really “finished”?

SS: I’ve gotten better at general building skills I think through experimenting and receiving great tips and advice from other builders. I’ve got more tricks up my sleeve these days as far as technique goes and although I rarely try anything too advanced, it’s nice to have them there when and if I need them. Large and highly detailed mocs are a challenge. My mind wanders a lot and it’s hard to stay committed to one project for a decent amount of time so most of my stuff ends up quite simple and uncluttered.

KG: It seems pretty clear that you were inspired by the completely awesome toys of the 1980’s: what are some of your favorites, and is it just nostalgia that drives your interest?

As a loner through my school years imagination was a great comfort to me, so my toys and my drawings played a big part of my childhood; if I wasn’t playing with or building toys I was sketching designs for cooler ones. My uncle has been an avid toy collector most of his life and always had way more toys than me, the childless bastard!

I guess it’s nostalgia that drives me and there’s a cute and innocent feeling with LEGO that I like to tap into, that playful look I really enjoy.

KG: Do you find that building affects your mood or vice versa? Do you have to be in the right mood to build?

SS: I’m always in the mood for building but if I get stuck for a few hours (or days) on something it definitely gets me down. I feel like I have to achieve something every time I sit down to build or it’s wasted time (which it isn’t really because learning comes from mistakes. Or so I try to tell myself…) Music really helps me create, especially aggressive music like metal. LEGO bricks are a listless bunch, lying around all day, they need some discipline. One has to attack them if one is to achieve anything, you see?

More of Keith’s interview with Shannon after the jump:

KG: Australians, like Americans, have a unique understanding of the art of smack-talking. I think this is due mostly to the fact that Australians are all sons of inmates, and the US has the largest inmate population in the world. In that spirit, give me something about the community that deserves a little smack.

SS: What kind of smack do you want? The kind about the guys with too many bricks and not enough talent? Or the one with the dudes who build one moc a year but somehow feel the need to voice their opinions every three seconds? 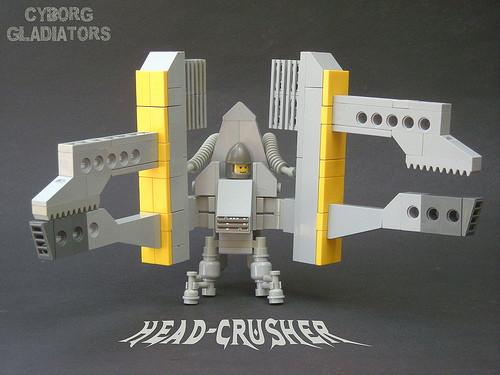 KG: What’s the coolest community-type thing you’ve seen online, be it a MOC, a contest, a video, anything?

SS: Chris Phipson’s ‘MocOlympics‘ and Shannon Young’s ‘MOCtag‘ were both very cool interactive online events. The MocOlympics because it involved a large number of builders across all ages and for getting many of us, myself included, to try building outside our comfort zones, often with very cool results. And Youngy’s ‘MOCtag’, the adventures of brave Rory, was so much fun to build for and exciting in anticipating the next instalment. Unfortunately I think Rory died a premature death; I’d like to see MOCtag resurrected someday.

KG: Do you have statistical expectations (hits, comments) when you post a model? If so, do you think of the model differently based on the numbers? If numbers hold no interest, do you have any particular people you get constructive criticism from, or do you go it alone?

SS: I don’t really have any expectations when I post something; it’s always interesting though to see what is popular and what isn’t — often it’s contrary to how I feel myself about the MOC! I guess I mostly go it alone with my building although I do get the odd suggestion if I post something I feel has failed, which is cool. I love posting failures and seeing other people’s abandoned projects, the creative process is every bit as interesting as the finished product I think.

KG: When the Star Wars contract finally grinds to a halt, what would you like to see take its place? What are we up to now, 10 different X-Wing kits?…do we really need more? 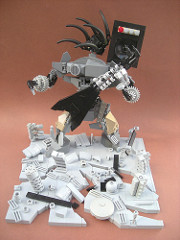 SS: Yes I think it’s time to bury the Star Wars cash-cow, it’s starting to stink. Don’t get me wrong — I’m a huge SW fan, always have been — but enough is enough.

I’d actually like to see Technic get a makeover. I used to love the Technic sets as a kid but the current ones are just missing something, maybe it’s those new Meccano-esque studless beams or the fact that Technic’s under-represented due to the SW mania? How about merging System and Technic to create detailed models with cutaway sections or something?

KG: Do you think we’ll ever see photos of the often rumored “secret” Indiana Jones set from the 3rd film where Indy gets an autograph from Hitler? What other Hollywood blockbuster (or Bollywood for that matter) do you see LEGO getting into?

SS: Hopefully not, for cringe factor that would be up there with a Sarah Palin LEGO set…. Hopefully we could get a rest from the licensed lines for a while. I feel like kids are just buying LEGO to re-enact their favourite movie scenes. Any old plastic toy could fill that role, LEGO has so much more creative potential, I’d like to see some themes that encourage kids to bring their own dreams alive with their imagination.

KG: If the Mayan apocalypse takes everyone out except you in the year 2012, would you still build?

SS: Ah sweet, I always wanted to be The Omega Man.

Yeah, building LEGO will still be on my to-do list although somewhere further down; there’s a few things I’d love to enjoy first, like cruising around naked in a stolen Ferrari…

KG: If you had to pick only one of your models to go in the great FOL time-capsule, which would it be?

SS: My “Overconsumption” sculpture, just for the “I told you so!” factor.

KG: If you could design an official set, what would it be?

SS: Oh man, I could name 30 guys off the top of my head I’d love to work with, but it would be awesome to collaborate with Mladen Pejic. Accidently stumbling across his mechs were what ended my Dark Age so yeah, it’d be great to build a large diorama with him as a way of saying ‘thanks’, if even only to get him building again at the very least!

KG: Name a famous person living or dead who would have made a great LEGO nerd.

SS: Jesus. He could summon me all the purple bricks I want.

SS: Er, I have a gun in my back and a masked goon wishes me to answer “Shannon Young” to this question. I have to go now!