In our fifth installment of interviews with LEGO luminaries, Keith Goldman crosses the Atlantic. Take it away, Keith! 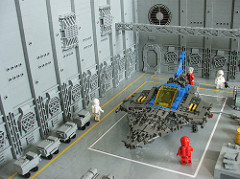 This week’s builder is one turtle-neck away from being the Carl Sagan of the Classic Space Crowd, Peter “Legoloverman” Reid.

Pete is known for his fine detail work, impeccable presentation and disarming smile. When I was recruiting heavy-hitters for my Zero Hour on Highway 44 project, Pete Reid was at the top of the list.

I sat down with Pete in his favourite booth at Old Pink Dog Bar on the lower south side of Han Dold City. We drank Nutrimatic beer and talked about Supermarine Spitfires, Benny Hill and the war of 1812. We also talked about LEGO.

Keith Goldman: What percentage of your builds never makes it to Flickr? Give us an example of a time you’ve failed with an idea or model.

Pete Reid: I’d guess around half the things I start don’t make it online. I feel duty bound to maintain a certain level of quality. A poorly-finished, half-assed model would reflect badly on my existing stuff. I can’t produce magic every time – sometimes it’s safer to destroy things than risk my reputation. I can’t build in that quick, instant gratification way anymore. These days, every move needs to be carefully considered (and preferably agonised over) before I’ll let it be part of the finished product. I fail all the time – there are just as many misses as hits.

I’d love to be able to build a big, beautiful Neo-Classic Space SHIP, with an insane level of interior detail and an exterior form to make a man weep. But I’ve had bad experiences building large models, and I’m daunted by the amount of time, money and effort I’d have to invest. I just don’t know if I could see it through.

KG: Sometimes I end up building things top-down, which isn’t terribly practical when building a structure. Do you have an order you build in, or a direction? Does it vary according to the type of model you are attempting?

PR: Totally. When I’m building ships I generally start with the cockpit, and let the model evolve and flow out naturally from there. With robots I usually start in the middle of the chest and work outwards (just like real robot builders do). Can I just ask – why would you start building a model from the top down, Keith?

KG: I’ve frequently read criticism of other old-school builders that goes something like: “Yeah, he’s ok, but he basically builds the same thing over and over.” I don’t read that or hear that about you. What do you think of that critique in general, and why have you beaten the rap over the years.

PR: I can’t believe I’m not accused of repeating myself more often. I remember when I first read the word ‘boilerplate’ on a LEGO forum (I think it was you who wrote it, actually). I felt a terrible guilt – you were talking about me, clearly. At every phase during my life as a builder I’ve developed things in tiny, mind-numbingly dull increments. 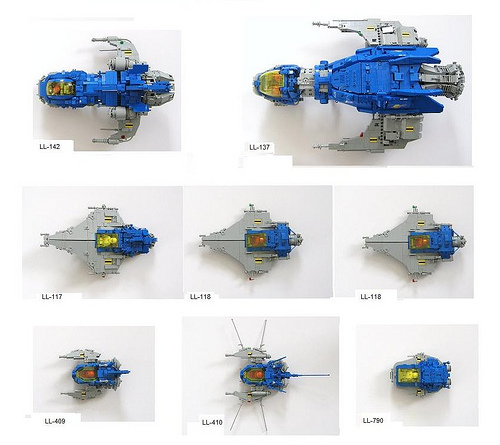 Could it be that nobody’s noticed I’m only capable of building four things, slightly differently, over and over? There’s infinite diversity to play with, of course, but I still feel like a charlatan sometimes.

More of Keith’s interview with Pete after the jump:

KG: How important is it for you to be “famous” within the community, and how much attention do you pay to the numbers (both hits and reviews)?

PR: I do enjoy the ‘fame’ thing, and would be deeply saddened if I stopped getting attention for my work. I have a pathetically fragile ego – it wouldn’t take many knockbacks for me to retire. The numbers are nice to look at, of course. A good stats spike is very satisfying. The ‘Unknown Source’ on Flickr bugs me though – I get a hundred hits a day from those guys. Who are they? Reveal yourselves!

KG: With so many people in the hobby now do you think it is more difficult for a new builder to make a name for himself?

PR: No – Flickr has made it a level playing field. It’s a good time to be a newbie. If you’ve got the skills and know how to take a decent photo (and add it to the LEGO group on Flickr), there’s a good chance you’ll be discovered by one of the bloggers. Where the heck did Pierre E Feischi come from? He’s burst onto the scene with some stunning models. His vision is amazing.

KG: You have a reputation as a good guy and not one prone to getting involved in petty internet drama. I challenge you to prove that you are not just another Hugh Grant style pretty boy, and give us something about the community that really chaps your ass.

PR: You know what really grinds my gears, Keith? The amount of exceptionally tall people involved in the AFOL scene, particularly in the Brickish Association. In everyday life, I am accustomed to being the tallest person in the room at any given moment. Something about the hobby seems to attract seriously lanky mutants – some of them actually have the gall to be taller than me. Those are the ones who sicken me the most.

KG: If you’ve been to a LEGO convention, give us your best anecdote.

PR: At a recent public show, I met a 12 year old FOL – Ed Bricks. He’d made a really nice Neo-Classic Space ground vehicle, and I thought it would be cool for him to get a photo of it against one of my background walls. I cleared my models off the display, and Ed began setting up his shot. He didn’t have a tripod, so I offered him mine. It was quite a crowded event, and as I passed the fully-extended tripod across the table, he leaned forward. I could only watch in horror as one of the legs arced inevitably towards his face and poked him straight in the eye. Fortunately I didn’t blind him, or pop his eye like a grape. It was a close call, though.

Part of me really did want to poke his eye out, Keith. Is it really so bad to want to derail the potential careers of up and coming builders? I feel very threatened by Tac, for example. He is so young, and so talented. It makes me sick. If he carries on building into adulthood, and continues to improve, the rest of us won’t stand a chance. It would be an awful shame if someone were to smash his thumbs with a hammer. An awful, awful shame.

KG: Will LEGO ever end their theme-spanning love affair with incarceration? Also, if you were designing a set with imprisonment in mind, what would it feature?

PR: I doubt it. Locking away the bad guy pushes all the right buttons with the kids, year after year. If the focus groups dig it and it makes money for the company, why change a winning formula? If I were designing a prison set, I’d love to do a big, high price point play set, with authentic ethnic groupings in separate wings, and some sweet transvestite action.

Speaking of focus groups, I’m very glad we’ve moved away from the nightmarish neon colours of those 90s Space sets. Focus groups during those years must have loved trans- neon green so much. Those children are adults now. Perhaps we should track them down and force them to ingest some of their precious day-glo trans. A suitable punishment for a decade of crimes against Space, I feel.

KG: Do you see the hobby continuing to grow, and do you see any drawbacks with growth?

PR: I think it will continue to grow. It’s still a niche hobby right now, but there are so many official products which are clearly targeted towards adults, and somebody must be buying them. I’m surprised it’s not a more popular hobby, generally. LEGO means a lot to me, and I often have trouble understanding that regular people don’t really care about it. How can they not care? I suspect there are many potential builders waiting in the wings – perhaps they’re holding back because of the terrible stigma involved with playing with toys. Get over it, people!

An influx of new blood is always good. Some of my favourite builders have only been on the scene for a short time. Occasionally, fully fledged AFOLs burst out of nowhere. I find that very exciting, especially when they’re Spacers.

KG: When companies are in serious decline, you sometimes see them make desperation moves to stave off the inevitable. Give me a wacked out theme LEGO might try if it threw its historically flexible morality to the wind. 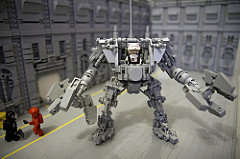 PR: The Exo-Suit. It’s the most popular model I’ve built, by a massive margin. The Marauder is my real favourite, but I’ll go with the people’s choice.

PR: The Ghoul. She’s a beautiful piece of design work, Keith. All the right lines in all the right places.

KG: If time, money and proximity were not an issue, give me two builders (besides me) that you’d like to collaborate with on a project?

PR: Aaron Dayman and Fredoichi spring to mind. Both are masters of their craft, and seem like they’d be good guys to hang out with.

KG: What is your favourite comment or review you’ve ever received on a model?
PR: The Exo-Suit broke out of the AFOL blog-o-sphere and was featured on Digg and Reddit. There are some pretty funny comments from non AFOLs, if you’re crazy enough to read through them.

KG: And finally, good sir, who controls the action?
PR: I don’t think anybody truly controls the action. We are all at the mercy of whatever forces guide us when we build. I try not to think too hard about how it all happens. That way lies madness.

6 comments on “Pete Reid: Pop his eye like a grape – Boilerplate & Beyond Vol. 5 [Interview]”