Our fourth installment of interviews by Keith Goldman feels a bit like Stephen Hawking interviewing Albert Einstein, with the added danger that a pair of dice somewhere may come up snake eyes and the universe will implode. Take it away, Keith!

This week I bring you perhaps the quintessential LEGO-nerd who is famous around the world and has been interviewed more often than any other AFOL.

I’m talking about the hobby’s one true rock star, who is all at once: builder, author, musician, actor, artist, raconteur, scoundrel, low-guy, philistine and the unofficial spiritual leader of our mannkinder flock: The Reverend Brendan Powell Smith.

I hung out with the critically acclaimed author of The Brick Testament series on Mount Golgotha, a rock cliff west of Herod’s Gate and just beyond the Old City of Jerusalem’s northern wall, overlooking the Garden Tomb. We drank Al-Sharq beer and talked about the Papal bull of 1493 (and the Treaty of Torsedillas), transubstantiation vs. consubstantiation, and the revelation that there were two “Roys” in “Seigfried and Roy.”

We also talked about LEGO.

KG: You have mentioned in other articles that you have been flooded with requests to use your images by religious groups around the world.  Give me three groups or places that you found the most interesting.

BPS: Over the past three years now, I’ve been getting requests at the rate of one or two per day from churches and other religious organizations around the world to use material from The Brick Testament in sermons, Sunday Schools, church retreats, etc.  The requests are so frequent nowadays that I don’t have time to read and reply to them all in person, and have set up an automated system to handle these sorts of permissions.

I find it interesting, but not all that surprising to receive such interest from religious groups.  I am well aware that it’s possible for people to read the Bible and not end up an atheist, so it makes sense that religious folks would enjoy a creative and humorous but also faithful-to-the-text retelling of the Bible’s stories in LEGO.

I’m not sure I can pick out three particular groups that I found most interesting since I know very little about the religious groups that write to me.  But I can share a three anecdotes.

There was one teacher from a religious education class who found The Brick Testament very useful in class and found that the students really responded to it.  But when some of the other faculty discovered that some of the Bible’s sexual content was illustrated in LEGO, the teacher got fired from his job!  He wrote not to express any bitterness, but rather to express his admiration for the website, and hoped the higher-ups at his next job would see things differently.

A handful of times I’ve had secular college professors let me know they’ve used The Brick Testament in their religious studies classes, and that’s been pretty gratifying.

And about a year ago I unexpectedly got a $16,000 check from an agency that collects usage fees for copyrighted materials in Australia.  I am not even particularly clear on the details of who was paying these fees.  There was a note about Educational Institutions and photocopying or something like that, but um… thanks, Australia!

KG: I met you at Bricks West 2 (2003).  It was my first convention and you were the person on the roster I was most fired up to meet.  I was disappointed because I was hoping for a Garey Busey looking character with salt-and-pepper hair, a white suit, black cowboy boots and a Texas string tie.  Can you fathom my disappointment when I finally laid eyes on you, and have you had a similar experience meeting LEGO fans?

BPS: I could fathom anybody’s disappointment upon meeting me in person.  It’s been the low point of many people’s lives.

The closest experience I can think of to yours is this: After seeing the name “Leonard Hoffman” for years on LUGNET and, based on nothing more than the sound of his name, I had this image in my mind of Leonard Hoffman as an uppercrusty, high society, monocle-wearing, prudish British minor royalty.  I’m not sure I can say I was disappointed upon meeting the actually Leonard Hoffman, but there was a real sense of cognitive dissonance when I had to now associate that name instead with the image of an easy-going stoner-college-roommate type who friends called “Lenny”.

KG: Do you pay attention to what’s going on with the great unwashed masses of builders, through flickr or any of the older means?  If you do, is there a type of MOC that catches your eye?

BPS: I usually check in here at The Brothers Brick once or twice a day, and that’s become my main way of keeping up with the best of what’s being built these days.  I find it a little sad that there’s no longer one single place where AFOLs can both see and have substantial discussions about what’s being built.  Flickr and blog sites are great for seeing great MOCs, but simple comment boards just don’t allow for in-depth discussion.  Message board sites like Eurobricks allow for better discussion, but have never mastered a way for the best MOCs to be spotlighted.  And The Brick Testament never really fit in at the niche sites like Classic-Castle or Classic-Space. 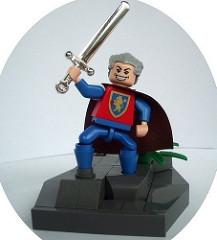 Anyhow, the MOCs that catch my eye are the ones that are innovative, clever, and/or humorous.

My favorite stuff is probably going to be close to the same sorts of things I build, so I look for a new way to pose minifigs, an unorthodox combination of parts, or just something deeply and darkly funny.  I’m too focussed a builder to deviate into participation in fads, but that’s not to say I don’t appreciate them or try to give them a shout-out in my own work.

For other well-established building genres, I tire of the same old same old, so they tend to only catch my eye when they really stand out from the crowd, put a new spin on things, subvert the genre, or take it to new levels.

But with so many great builders out there now and so many ways to share photos, I’m pretty much guaranteed to see something I like or am impressed by everyday.

KG: Has anyone inside or outside the community ever tried to glom-on to the success of your publishing career?  Also, do you get groupies like other famous authors?

BPS: Every so often I get e-mails from other builders looking for advice on getting published and/or how not to get sued by LEGO.  I’m afraid I don’t have much helpful advice to pass on.  When I actively tried to find a publisher, I failed, so I just went back to creating, and eventually the offers came to me.

I haven’t really had any troubles with people glomming on to me personally.  I get a lot of nice comments via e-mail, but The Brick Testament has no comment section or message board, and maybe this has prevented potentially rabid fans from combining forces or whipping themselves into a frenzy, constructing effigies of me and burning them or having sex with them or both.

KG: Say you burn through the bible and you look for the next great project involving LEGO, would it feature some other sacred text, or would you leave the literary genre completely?

BPS: I have some interest in illustrating other holy books, but I’m not sure that would be at the top of my list.  And considering the Bible has kept me occupied for over eight years now, I’m not sure I could work up the same devotion for the Qu’ran, Book of Mormon, or Rig Vedas.  Maybe if I had more lifetimes.

I won’t know for sure what project I’ll feel like doing until I actually finish the Bible, which could conceivably happen two or three years from now.  But already I am embarrassed by the poor quality of my construction and photography from eight years ago, so maybe I’ll be caught in a vicious cycle where I’m always re-illustrating the crappy work I did eight years before and I’ll be stuck illustrating the Bible for life.  That wouldn’t be so bad.

But as of right now, the non-Biblical material that interests me the most for a future illustration project would be the various Christian gospels, acts, and apocalypses that didn’t make it into the New Testaent, or the works of the historian Josephus who recounts in great detail the events during and leading up to the First Jewish-Roman War of 66-70 CE.  Fascinating, humorous, and tragic stuff, much in the vein of the Bible itself.

KG: Will we ever see a sequel to your groundbreaking independent debut in Vendetta: A Christmas Story?  Has Hollywood come slouching to your door?  What about Bollywood?  Have you considered directing a brick-flim?

BPS: Vendetta was a blast to make, and I’m quite proud of it, but like any video project it was very labor intensive.  I’m not particularly drawn to doing a brick film since I feel like still photography storytelling is a genre I’ve become quite good at and appeals to me much more.  From adolescent experimentation I know a little about what goes into making a stop-motion film, and unless I had a paid and motivated crew assisting me, I think I’d always rather spend my time adding more still-image illustration stories to The Brick Testament.

I get requests from Bollywood at the rate of one or two per day.  But they are all for me to  stop singing, stop dancing, and stay out of India.

KG: Since the hobby keeps growing I’m sure you’ll agree that it is only a matter of time before some C or D list celebrity will become an AFOL.  Give me three celebrities from any field that would make great AFOLs.  I know you’re a Patrick Swayze apologist, but I’d appreciate if you’d limit your answer to the living.

BPS: For The Brick Testament I really consider the photos to be the finished artwork rather than the MOCs themselves, so if it’s a valid answer, I’ll say a printout of the Book of Revelation.  If that’s invalid, just take The Last Supper which I still actually have around as a MOC.

BPS: Now THAT is Black Fantasy, no doubt.

BPS: I’d love to have Michael Jasper work on character and prop design for The Brick Testament, and Sir_Nadroj for vehicles, architecture, and scenery.

KG: What’ is your favorite comment or review you’ve ever received on a model?

BPS: I really enjoyed watching random residents of Bratislava, Slovakia come across my “Accept Communism or Die” story that the SPACE gallery had displayed across the length of their building.  Their stony silence spoke volumes.