As a former Bostonian from a family of New Englanders, I was bred to loathe and ridicule all things New York, but I can’t help but love I LEGO N.Y.

The book pulls together the simple but immediately recognizable icons Christoph built from his son’s basic bricks last year, and featured on his New York Times blog Abstract City Blog (along with several new pieces).

When the publishers sent The Brothers Brick an early copy to review, I was honestly expecting the kind of throw-away, impulse-purchase novelty books you find while waiting in line at Walgreens and Barnes & Noble, with poor copy editing and grainy pictures.

Instead, the only words in the book are the hand-written labels explaining each tiny creation. 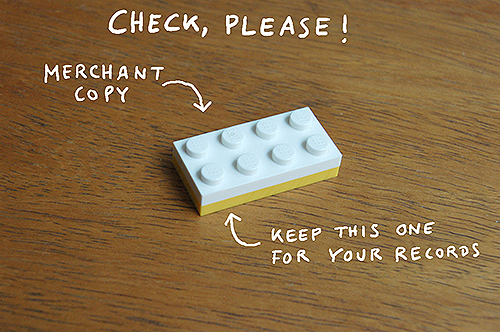 The text and photos appear to have been cleaned up from the versions posted on Christoph’s blog, and the book itself is presented in the form of a durable board book like Eric Carle’s classic The Very Hungry Caterpillar

Here at The Brothers Brick, we feature a lot of amazing creations, from motorized cities of the steampunk future to lenticular mosaics, but it’s books like this and vintage LEGO ads that take us back to our earliest days playing with LEGO — long before SNOT, fan conventions, and Internet drama.

When you put one brick on top of another, you mostly just get two stacked bricks. Sometimes, though, you get New York City.

I LEGO N.Y. ($14.95) is due out from Abrams Books next month, and is available from Amazon.com

1 comment on “Why we love I LEGO N.Y. by Christoph Niemann [Book Review]”