Interview with LEGOLAND California Master Model Designer Gary McIntire, continued from part 1. We talk a little bit more about design, repair and tools of the trade.

TBB: How do you go about designing and building a model? And how is it different from a fan or personal creation?
GM: When we start, we have to think about the location: sun exposure, guests, and whether it’s indoor or outdoor. Then we have to consider how it’ll be mounted to the ground. What we’re doing is fundamentally different from fan creations or sets because it’s an installation. We have to think about the surfaces, steel braces, and access panels for animation. We also have to get input from other people, I can’t just do whatever I want. It usually starts with a specific model request, then I design from there. I consult image resources. It’s important to keep in mind that what we think something looks like is different from what it actually looks like in real life. There are little details that may not be in our heads, but are what make it. At the same time, caricature is necessary to some extent. Models have to be recognizable, but can suffer from reality. Everyone has to keep in mind that it’s a version of the real thing. It has to look right, but is a model DESIGN, not an absolute replica. 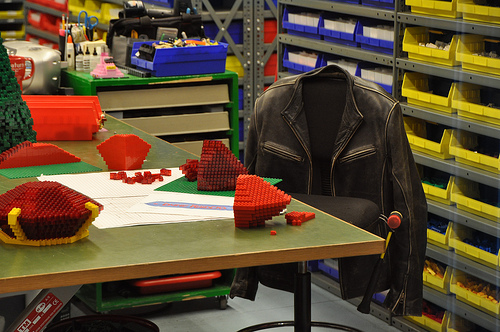 TBB: What’s that on your desk?
GM: Those are a pair of transparent red jewels that are going to go on either end of the Dune Raiders sign in Land of Adventure. They wanted something to fill out the sign, so we worked out this design and after a few sketches, I’m building it (pictured on right with red mock-up interior). The interior is just white, and the last couple outer layers are trans red, so the sun will shine through them a little. They also have a yellow base and clasps to represent the gold.

TBB: What’s up with that Shaq model that has “34” tagged up on his chest?
GM: That’s an example of a mock-up; we’ll usually do that when we need to take into consideration a complicated combination of color and shapes. We’ll do the shape then draw on the areas where there will have to be different colors. Then we’ll rebuild the model knowing where we have to put the appropriate color. Usually the mock-ups are recycled or reused, but that one stayed.

TBB: What kind of tools do you use?
GM: Pliers, cutters, chisel, brick separator, mallet, and a power drill, but I have to build some of my tools, like a Jedi. (laughs) I had to modify a set of needle-nose pliers so they bend in to grab and dig into a glued brick that I’m tearing out (pictured below). I also use a special version of wire cutters to cut studs off. They’re called stud cutters. 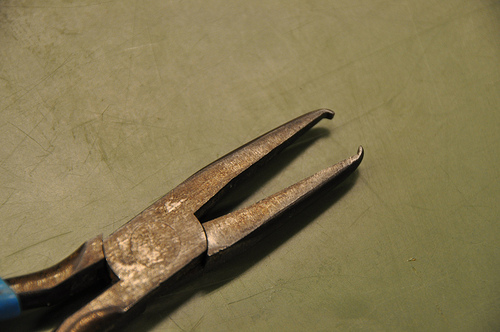 TBB: Why do you have to cut studs off?
GM: Some of the models have access panels to allow repairs for the animation inside. Those panels have to slide in an out, and the simplest way is to cut the studs off (example pictured at right). The reason we use regular bricks and plates and remove the studs instead of using tile, is because tile pieces have the little lip at the bottom so they can be taken off plates by little kid fingers. That little tile lip is pretty noticeable on models. The access panel thing brings me back to one of the other things about these installations, we really have to take into consideration the hollows and angles inside a model in order to allow the movement of the animation inside.

TBB: You glue your models right? Why and how do you do that?
GM: Yeah, the models are all glued. A layer of glue is put down, then a whole layer of bricks is applied, until we’re done with the model. The glue is pretty strong, so usually when we have to refurbish or repair, the brick will break before the seal from the glue. I’ve torn apart a lot of bricks. When it’s finished, we also spray on a UV protective clear coat on the exterior that prevents some fading.

TBB: How exactly does the refurbishment process work?
GM: First, we uninstall the model and take it to the model shop by hand, cart or sometimes even with a forklift. The largest models we have to either repair in-place or take directly to our nice brand new blasting facility, which has a little more room. Once we get it in the shop, we clean it to see what we have to work on, then actually do the repairs, which can be rebuilding chunks of worn brick, reinserting glue into cracks between layers then pressing it back together with clamps or replacing extrusions that have broken off. After making the repairs, we sandblast the exterior of the model with crushed walnut shell, which takes off the clear coat and a tiny layer of the outer plastic, which makes the whole exterior a kind of matte finish. Then we spray on a new layer of clear coat on the exterior, which brings the original glossiness of the original bricks right back out. The reason we do the repairs before the sandblasting is because it makes it look more uniform. We can usually do that kind of refurbishment about two or three times to a model before it’s out of commission for good. One fun tidbit is that after about the second blasting, you can’t read the LEGO logo on the tops of studs. After all that is done, we reinstall the model. 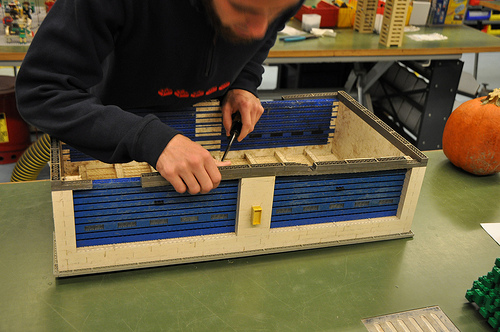 TBB: When you’re doing a repair or refurbishment, what other things do you have to take into consideration?
GM: Quite a few things. We try to keep some age and color consistency, so like on a building model I’m replacing right now, since I’m having to replace most of the gray bottom strip of a white building, I’ll go ahead and take off the rest of the gray, so when it’s put back on display, the grays will all match and since the white is in good shape and consistent, it’ll stay the same (Above: Gary removing the gray layer). On other models, some redesign might be necessary because of extrusions or other types of things that I know won’t survive a lot of guest contact. A design for a model can be really great, but sometimes I can tell right away when it’s installed that I’ll need to redesign it during the first refurbishment, because of a feature that will make it more vulnerable to damage. Anything flimsy combined with months or years of guest contact are going to get damaged. Witches noses, tea spouts and monkey fingers are pretty common examples where I’ll need to restructure it or put in some reinforcement when I replace the broken parts.

TBB: What do you do with dropped and damaged brick?
GM: Damaged and glued bricks are recycled (pictured below). Clean bricks from mock-ups–or that got dropped on the floor–we put in another bucket which is sent to the building and play areas, where it’ll be reused. 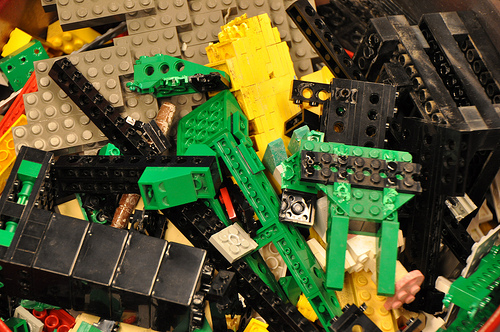 TBB: What kinds of considerations for the cars and other electronic models?
GM: I work with the animation guys in the next room who do the electronic and mechanical things. They bring me vehicles that need to be refurbished to keep them running correctly, and I have to check with them to make sure the inside space of a car has enough space for the batteries and mechanics.

I’ll post a story soon reflecting on a few of my impressions and additional info we didn’t get to during the formal interview that some of you might be interested in hearing about.

3 comments on “Behind the scenes at the LEGOLAND California Model Shop: an interview with Gary McIntire [part 2]”