Many LEGO fans were amazed when they saw the Daedalus Landing diorama by Sven Junga, but perhaps more impressive was the young age of the builder who created this masterpiece. In this interview with Sven, who is also one of the friendliest people I’ve corresponded with, I asked the question on many people’s minds: how did he do it?

The Brothers Brick: Tell us about yourself.

Sven Junga: I was born in 1994, which makes me (what some people have questioned) 15 (soon 16) years old. I live in Germany and love to build with Lego. I enjoy many sports, especially mountain biking and track & field; I also play the acoustic guitar. As for my musical tastes, I’m a metal/rock guy and like Metallica, Nickelback etc. I consider myself very ambitious and I like (building) challenges.

TBB: How long have you been building and when did you discover the online community? Which groups and forums are you a part of?

Sven: I’ve been building since I was 3 years old; in 2008 I discovered the online community by making my MOCpages account. My Flickr account was made in 2009 and I’m also a member of the German Lego-site, 1000Steine. There are no LUGs or other offline Lego-communities I’m part of. 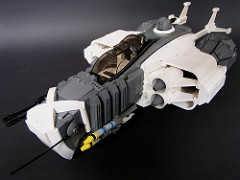 TBB: What do you like to build and what are your inspirations?

Sven: As I’m a big fan of nearly all sci-fi series and movies like Star Trek, Stargate, Star Wars and many others, these are my main inspirations. All my builds happen to be very spontaneous. When I see something I want to build, I transform it into Lego in my mind, and sometimes I look for some reference pictures on the internet, but I never make any drawings nor do I spend a long time on preparations. Any creation I plan for a long time probably won’t ever be built.

TBB: Tell us about your recent Daedalus landing diorama. How long did it take and where do you get all the bricks? 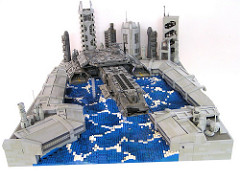 Sven: Actually I started off with just the Daedalus in late September. When Shannon Young announced his Vig/orama Contest on MOCpages, I thought it would be cool to build a part of Atlantis as a diorama with the Daedalus landing. Of course I didn’t work on it day and night for two and a half months. I only build when I want to and have enough time, sometimes a MOC stays for a week without any changes and other times I’m caught by some kind of Lego fever which doesn’t let me stop building until a creation is finished.

At the age of 3 I got the old collection of my uncle for Christmas, since then my collection kept growing over the years, so most of the bricks in the diorama I already had. Although I use Bricklink, I don’t just buy everything there – only special parts or those which are really necessary. Furthermore I always take apart older creations for building new ones; that time I wrecked the Juggernaut.

TBB: Many fans dream of building big; how did you do it? Did you build smaller creations at first? 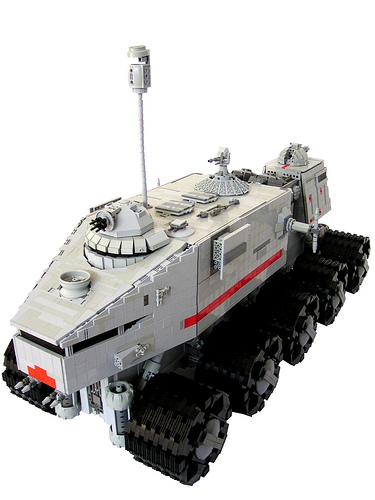 Sven: Of course it’s important to have a big collection, but I think it’s equally important the way someone uses it. If I realize I’m getting short of the desired parts, I try to use other parts which are not being used that often, and many parts that are apparently unfitting look great if used in another way. My builds often scratched the limit of my collection and still do. I also build some small things, but it’s mostly the big MOCs that gather all the attention.

TBB: What advice do you have for aspiring builders?

Sven: I’m not sure if it is possible for me to answer this question. By doing so it would show that I think of myself being better than other FOLs and good enough to give them advice, but in my opinion there is always room for improvement and even the best builder started small. I could say what has already been said many times: keep building, find your style, be creative… and so on. But the only thing I’ll say is: have fun with the bricks!

TBB: What future projects or goals do you have in mind?

Sven: What I have in mind to build changes from day to day so there is no real building goal for me, but on MOCpages and Flickr I’ve read and heard much about the fantastic Lego conventions in the US (BrickCon and Brickworld), and I really hope to go there sometime. Another thing would be finally getting around to organizing my collection; it’s just so much work…

7 comments on “Aged building skills: an interview with Sven Junga”