Ever since I recruited Josh and we renamed our newly relaunched blog “The Brothers Brick,” I thought it would be awesome to have my real-life brother join us. Call me sentimental, but it just made sense.

Our LEGO brotherhood has been a circuitous journey that goes back more than 30 years. When he was barely walking, Thanel (not his real name; he’ll explain why) destroyed my 381 Police Headquarters by climbing up to my top bunk, where I’d built it, and pushing it off to the floor below. I was devastated.

When he was old enough to have his own LEGO, our rivalry continued. 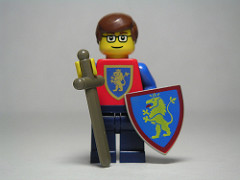 My Crusaders and Forestmen waged endless battles against his Black Falcons on our bedroom floor, complete with movement rules and hit points to track who was winning — at least a decade before BrikWars. We also built collaboratively, combining our collections for moonbases and medieval landscapes that rival in size (if not in building skills) some of the largest dioramas we regularly feature here.

As we grew older and each entered varied levels of Dark Ages, LEGO remained a point of commonality — graduation and birthday gifts to each other, and conversations about the latest Wild West and Adventurers sets we saw in stores.

All that is in the past, though. Looking to the future, I’m very pleased to announce that Thanel is joining The Brothers Brick as our newest contributor. One of the main things he’ll be documenting with his posts will be his emergence from LEGO isolation into the broader LEGO fan community — both online and offline. I think this is a different perspective from that of our other contributors, each recruited for their deep ties to various LEGO fan communities.

It’s also a point of view shared by many of you readers out there. Where do I start? Is there a LEGO club in my area? What’s it feel like to post that first work-in-progress LEGO creation and have it ripped apart? Thanel will be working to answer those questions.

But enough from me! Let’s hear from Thanel himself.

3 comments on “Please welcome my brother to The Brothers Brick!”