As much as I enjoy the robots, spaceships, and tanks we blog here on a regular basis, there are also those occasional LEGO creations that remind us that we’re part of a broader world — a world in which war is not fun and war is not play.

My brother and I went to see Schindler’s List a few months before I found myself standing in the silence of the Hall of Remembrance at Yad Vashem in Jerusalem. Matija Grguric captures one of the most moving moments from the film in this vignette.

Though we haven’t featured her work before, Legofesto has been protesting the torture and abuse of detainees caught up in the Iraq War and “War on Terror” for several years (via VignetteBricks): 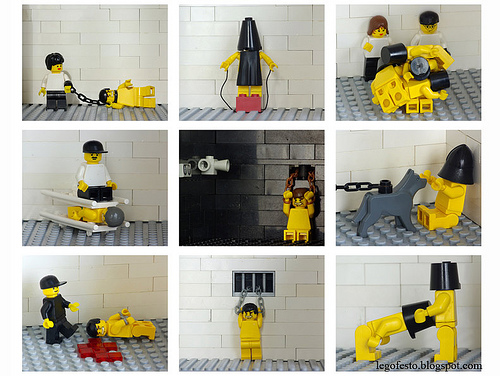 For me, LEGO has always been a medium for potential art, and art doesn’t shy away from the world we live in. There is beauty in truth, no matter how ugly the reality. In the very revulsion I feel about what I see depicted in these vignettes — heightened by the fact that the medium is a children’s toy — I find hope that there will come a time when humans rise above our own depravity.

If you feel compelled to do so, you’re absolutely free to engage in respectful, thoughtful (inevitable) debate in the comments. But this also seems like a good time to remind everyone of the Terms of Service. Racism, abusive language, and anything construed as bigotry will not be tolerated.

37 comments on “Holocaust and torture depicted in LEGO”