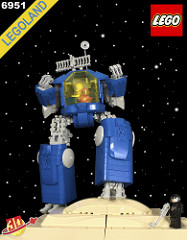 Set 6951, the Robot Command Center was my absolute favorite Classic Space set (of the sets I actually had) when I was growing up. When the opportunity came up to create a Neo Classic Space creation, my mind immediately went to this set. It was basically a mecha, except that the legs didn’t move at all, and the arms were attached to the knees.

I figured that new parts and techniques would allow me to do something really cool with this idea. I did decide to lose a few of the play features from the original, even though I like them. There was just something about a little ship docking in my mecha’s crotch that didn’t seem right. I’m surprised that so few of the builders in this effort built robots, but at least it makes my contribution fairly unique.

I also have to thank one of my non-LEGO friends for suggesting an electric guitar, so it could rock out.

4 comments on “My Neo-Classic-Space Contribution”