As some of you may know, this March (you know, starting tomorrow) marks the 30th anniversary of LEGO space sets. A group of fans is celebrating this in a big way, by unveiling a new Neo-Classic-Space creation every day for the entire month. Check it out, and don’t forget to keep an eye out for my own contribution sometime during the month. 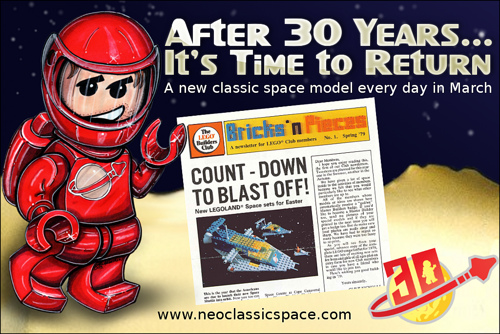 March 2009 sees the 30th anniversary of the original Classic Space sets from LEGO. Now, three decades on, it’s time for a celebration of spacey goodness at www.neoclassicspace.com.

The culmination of a top-secret project planned over many months, www.neoclassicspace.com will present a new model every day throughout March, many from builders you already know and love, some from new talent you may not have discovered.

This is only the beginning. It is time to retake space. We hope you’ll come along for the ride!