Recently Box4Blox sent us a couple sets of their sorting system to review. First off, if you aren’t familiar with Box4Blox, it is a series of stacking trays. Each tray has openings in the bottom, much like a seive. The openings in the trays get smaller as you continue down the stack. This has the effect of sorting your pieces by size.

As my kids have their own collections, I let them use one of the Box4Blox sets. It sorted their pieces by size and made it easier for them to find those small pieces that get lost in among the larger ones. They had a lot of fun with it and I was happy that it worked as advertised. But now was the time to try it out on my own collection.

I was intrigued to see if this system would be of use in my own, more complex, sorting arrangement. I started off with my bin of green plates. I use these a lot for landscaping but had never taken the time to sort them by size. I figured this would be a good initial test. At first I dumped the whole bin into the top tray. This clogged up the tray and it took a lot of shaking before the pieces began moving down. So I dumped it all back into my bin and I used a large Pick-a-Brick cup to dump smaller amounts into the tray. This sped up the process and I was able to run the entire bin throught the Box4Blox in sort order. As each tray filled up, I dumped them into seperate piles. 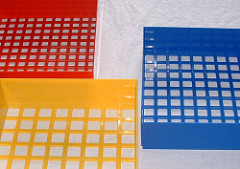 After I was done, I shuffled throught the piles and was happy to see that each pile was made up a distinct group of pieces. So, while the trays didn’t sort out the pieces into each individual kind, they did make the job much easier. I only had to sort out the 3 or 4 different kinds in each pile, instead of tackling the entire bin. That was most satisfying. 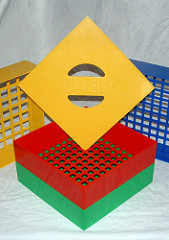 Next, I decided to give the Box4Blox a real workout. I have a large 18 gallon tub where I throw everything that needs sorted. I’d been lazy and hadn’t sorted it for quite a long time. The tub was almost full and the job was overwhelming. So I put in a movie and started dumping cupfulls of pieces into the trays. I did run into a couple of problems. Pieces that were long and thin tended to fall through to the bottom, but remain standing straight up. This blocked the flow but after I discovered this, I would grab those out before I dumped the pieces in. After that, I didn’t have much trouble and I made good progress. After about an hour, I hit bottom.

Unlike the plates, when the trays filled up I dumped them into plastic bags. I had stacked the full bags into seperate piles, based on which tray the pieces came from. After I was done, I took all the bags from one pile and I dumped them out on the table. I spread the pile out and could see that each of the bags had the same kinds of pieces in it. The Box4Blox basically pre-sorted my 18 gallon tub in a little over an hour and greatly simplified the rest of the job. Now, when I have some spare time, I can grab one of those bags and quickly sort it out. I don’t have to take on the whole heap and I know that each bag contains specific kinds of pieces.

Overall, Box4Blox easily surpassed my expectations. Not only is it a good product for keeping the kids’ bricks sorted, it also has a definite place in the Adult hobby as a pre-sorter. I recommend it.